Recently I attended a Pre-Medical course at Imperial College in London. The course was an exceptional insight into the medical career I wish to pursue in the future. I listened to various lectures by qualified doctors; topics included:

I also got involved in workshops; there was a session about how to interpret an X-ray as well as a communication lesson, in addition, I attempted suturing.

This unique experience was great; it was intriguing to get a taste of what I’ll hopefully be studying next year at university. It made me aware of the extreme commitment of the medicine course and the dedication required; especially in the three clinical years where I will only have 4-6 weeks holiday, compared to most university courses which allow for 3 months.

I was taught about the typical day of a doctor; how busy yet rewarding the job is. Hearing the information from doctors themselves made me excited about taking such a career path. Despite the exams and stress, I believe that becoming a doctor is the perfect career for me; a mix between science and people, everyday is different and I’ll always have a direct impact of the community around me.

Currently I’m unsure if I want to specialise in any particular area of medicine; I may become a GP. All in all I’m so glad that I participated in this course as I was able to confirm medicine as my career choice and now I’ll go anywhere in order to achieve this dream.

Recently I was offered a tour around the Paula Carr diabetes clinic to understand more about the advances being made in local treatments for diabetes. My sister Emily gets regular check-ups there and so it was great opportunity to see all of the equipment available to ensure that her and other diabetic’s health is maintained.

Gary Fagg, chairman of the Paula Carr trust, showed me around the clinic. 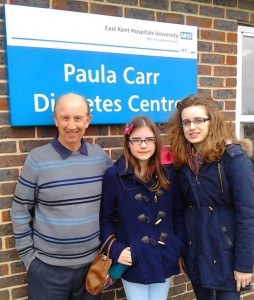 It was set up in 1992 and since then two more clinics have been created in Maidstone and Margate. Named after Paula, a diabetic who died at the young age of 13 years of hypoglycaemia, the charity’s success has been supported by Paula’s family.

The clinic is well equipped due to charity funding, particularly in 2003 when £700,000 was raised to equip for diagnosis and treatment of diabetic eye disease.

Retinopathy is a possible complication of diabetes and if it is not treated it can lead to blindness. Hence it is vital that patients are screened annually as diabetics may not be aware of their condition until their eyes are permanently damaged.

I was shown examples of the digital images taken of diabetic’s eyes; it was amazing to see how clear and intricate the pictures were, making diagnosis of disease easy to reduce severe consequences. I was also shown to a couple of the various vans the charity owns which have the equipment for eye screening in them; patients in rural areas can visit the vans to be diagnosed.

This guarantees that the majority of diabetics in the area are diagnosed early for eye disease, thus overall the charity screens 85,000 patients per year.

From the tour it is clear that Kent is ahead in the future of diabetes with the Paula Carr trust. The facilities in the clinic are out of their league with various consulting rooms and even a kitchen for patients to learn how to cook healthy meals to ensure their sugar levels are maintained. The clinic has recently had a loft conversion meaning there is now extra space for vital work towards diabetes to be carried out.

So far the Paula Carr trust has used £3 million to support those in Kent with diabetes, however the charity are only small and so need donations to ensure that improvements can be made. If you want to find out more about the trust go to: http://www.paulacarrdiabetestrust.co.uk/ where donations towards the charity can also be made.