At the care home where I volunteer I find that almost all the residents have some level of memory loss. From forgetting my name after a week to not knowing who I am half way through a game of scrabble. I’ve always known that older people become absent-minded, but never really considered what is at the crux of its cause. Taking my curiosity further, I’ve decided to research into the causes of memory loss and how we can diagnose when symptoms get serious.

Memory loss (amnesia) means when a person cannot recall past events that they would usually be able to remember. Such simple symptoms can be linked to more severe diseases, however it is normal to become forgetful with age; so when do we need to worry?

Memories are classified into 3 different types – immediate, short term and long term memory. Short term memory is processed in the pre-frontal lobe at the front of the brain. The hippocampus then translates this into long term memory. The neurons that link memories will soon become fixed combinations so that things you remember you will then associate with other things that were happening at the same time. Hence, memory is a complex feature of the human body, but what causes this ability to deteriorate?

The most common causes of memory loss are depression, stress and anxiety; all of which cause the person to not concentration fully and so not remember things in the first place. Older people will often express differences in their personality with strange behaviour like hoarding or bad temper. Antidepressants are best for treating this type, which can alleviate problems quickly if the person is younger as they will only mostly forget small things. Accidents that result in head injury are another main cause, as well as strokes which cut off some of the blood supply to the brain. The consequences of this cause can be more extreme where people forget events that happened before the accident which is known as retrograde amnesia, or anterograde amnesia; where you forget everything that occurred after the trauma.

Less common causes include having an underactive thyroid which is a gland in your neck that produces hormones which regulate the body’s metabolism. Treatments for other conditions such as Parkinson’s disease may have a side effect of memory loss. Misusing alcohol for a long period of time, bleeding of the brain, vitamin B1 deficiency, a brain tumour; all can result in forgetfulness. There are also two others types of amnesia; firstly transient global amnesia which is caused by blood flow problems to part of the brain, and secondly psychogenic amnesia which involves a stressful event that causes someone to block out their memory.

So when does memory loss reach the extent to which it is classified as dementia? 40% of people over the age of 65 years have a type of memory loss, but only 15% will develop dementia, nevertheless dementia affects 1 in 14 people 65. Therefore, you are unlikely to get dementia if you are under the age of 65 years, and memory loss will develop very gradually. Hence, you and those around you are likely to take your symptoms seriously for a while. The speed at which symptoms progress depends on what is causing the dementia.  Vascular dementia results in symptoms developing suddenly and quickly getting worse, whereas dementia with Lewy bodies may include more symptoms such as hallucinations, and frontotemporal dementia includes changes in emotion and language problems.

Hence, the term “memory loss” covers a broad range of conditions. Although most do not have a cure there are tips for those coping with such symptoms. To remember simple everyday things keep items in the same place and do your daily routine in the same order each time. Keep record of information and keep a diary if you are working. An alarm may help for tasks such as cooking and repeating important information once being told will help you recall it.

In conclusion, when I next visit the care home I intend to enquire of any residents that are suffering amnesia and will try and link one of the possible causes to their symptoms. To find out more about memory loss visit: http://www.nhs.uk/conditions/memory-loss/Pages/Introduction.aspx, or for more about the way the brain stores memories go to: http://www.livescience.com/32798-how-are-memories-stored-in-the-brain.html.

For the past 2 years I have been travelling to various countries with my grandmother: Tunisia, Majorca, Morocco and soon the Dominican Republic. Most of these we have had to have vaccinations for; due to poor sanitary conditions in such areas. Previously I have just seen this as a simple requirement and have not really thought about what each disease actually is. Therefore, I have decided to look into one of the most common vaccination required; Hepatitis.

There is a range of different type of hepatitis; however I have only had injections against type A and B. The general term “hepatitis” actually means an inflammation of the liver, which can be a result of several circumstances. Symptoms include muscle pain, a fever, feeling sick, a headache and yellowing of the eyes. Nevertheless, many people are unaware they have the disease as it is caused by a virus and so a lot of cases have no noticeable symptoms at all. 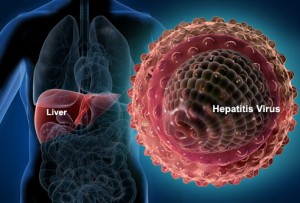 Hepatitis A is caused by eating something contaminated with the faeces of an infected person. This is less common in England with only 350 cases annually; poorer countries with meagre sewage disposal are most affected. This type is prevented with a vaccination that lasts 6 months, and then a booster could last more than 20 years. There is no particular treatment available, other than treating the symptoms as the infection is usually short term; passing within 3 months.

Hepatitis B is uncommon in the UK as it is predominantly spread by unprotected sex, sharing needles to administer drugs; through fluids including semen and vaginal fluids. The virus can be fought off within a couple of months. However, it can develop into a long-term infection known as chronic hepatitis B which causes cirrhosis and liver cancer. This can be treated with antiviral medication. Those working in healthcare institutions have to be immunized as they are in an environment where injecting drugs (for medical purposes), may occur. 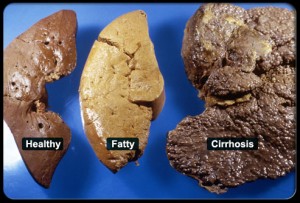 The most common type is hepatitis C as 215,000 people have chronic hepatitis C. Primarily caused by the virus which is found in blood, this type causes no noticeable symptoms. In 3 of 4 people affected, chronic hepatitis can ensue which can cause liver failure and cirrhosis. Antiviral medication is again the only available treatment, but there is currently no vaccine against this type.

Hepatitis can also be caused by drinking excessive alcohol as you are likely to develop liver failure. In addition, there are rarer types; hepatitis D and E. D is specific as it can only occur in people already infected with hepatitis B, and D basically increases the risk of cirrhosis developing. Rarer type E is only a short-term infection transferred in the same way as hepatitis A. Finally, autoimmune hepatitis follows if the body’s white blood cells attack the liver which can cause inflammation. Fortunately medicines that suppress the autoimmune response are available as well as steroids which gradually reduce the swelling.

Indeed, I had not realised how many forms of hepatitis existed as well as how severe the disease can get. Recently a family relative has been diagnosed with hepatitis C, which confirms how common this type is. Hence, I encourage everyone travelling to new areas of the world to ensure they are vaccinated against relevant types of hepatitis, as well as any other immunisations that their GP recommends. For more information on hepatitis visit: http://worldhepatitisday.org/en/learn-the-facts. If you intend on travelling soon be sure to check http://www.fitfortravel.nhs.uk/destinations.aspx for updated health advice if you are departing from the UK.

The majority of people affected by the condition are over the age of 65, although there are 40,000 people in the UK who suffer the disease and are under 65. The symptoms develop progressively, however the disease can be experienced in different ways so the symptoms are unique to each individual. Most importantly is memory loss due to the damage of the hippocampus (part of the brain), thus memories from a long time ago still exist in the early stages; it is the memory linked to daily life which is affected primarily. Other symptoms include language difficulties, physical judgement, orientation and difficulty in organising or concentrating.  In the later stages the person may develop behaviour which is unfamiliar, have difficultly physically walking and eating; increasingly needing the help of their carer.

A person with Alzheimer’s will generally live for 8 to 10 years after their diagnosis, although this varies depending on the age they developed the symptoms. 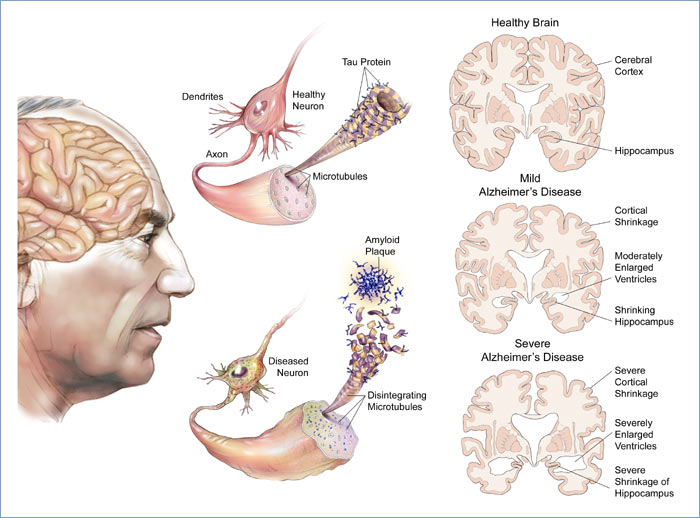 The disease physically affects the brain due to the building up of proteins that form plaques within the brain. Consequently, there is loss of the connections between nerve cells leading to the cells deaths causing brain tissue to be lost. Hence, those with Alzheimer’s lack significant chemicals in the brain which usually transit signals around this vital organ. There are treatments that aid the amount of chemical messengers there are present, however there is no preventative cure. Drugs such as donepezil may be prescribed to help with some of the symptoms in the mild stages of the disease. Memantine is given during the moderate stages to deal with mental abilities and challenging daily living. Other activities such as reading or attempting puzzles benefit sufferers as they cause them to exercise their brain to stay mentally active.

The Alzheimer’s Society in the UK is a key charity that is researching into the disease in order to find a cure. To donate or find out more go to: http://www.alzheimers.org.uk/site/index.php.