Last weekend I attended the national Model United Nations hosted by Joseph Chamberlain College. The event was quite enjoyable and the resolution I submitted managed to past general assembly which was very pleasing.

We arrived at the college mid day Friday to begin the lobbying stage of the model United Nations. I was representing the state of Egypt and co-submitted a resolution with delegates from Nicaragua, Saudi Arabia, Bangladesh, Iran, Syria an Malaysia. The submitted resolution had heavy influence from my resolution and called for complete disarmament of biological weapons among some other things. The alliance was very strong and because we controlled seven votes, when it came to the committee stage of debate, other delegates were keen to win us on side so they would have 7 votes in favour of their resolution and were more likely to be passed to general assembly. This gave the AAF( our alliance) which stands for the Aniti-American Federation much power and we controlled the committee stage of debate. We instructed other delegates which way to vote and had all the power. Note passing led to some scares for the alliance when the Nicaraguan delegate amongst others were warned for the content of some notes but no matter, through strong debate, support for each other and a little bit of flirting, the AAF managed to get our resolution passed to General Assembly. One delegate took heavy influence from the sample resolution when writing his own resolution which the AAF challenged strongly. A personal highlight for my self was combatting points made by the Israeli and US delegation( neither are big fans of Egypt) and making both sit down with my argument prevailing. The chair recognised our control and humour in the committee stage and applauded us for keeping it entertaining but asked us to tone back some of the banter. The committee stage was very enjoyable and I asked lots of questions to challenge other delegations on their resolutions. The food was very good especially a Burger Bar where my college went to eat on the 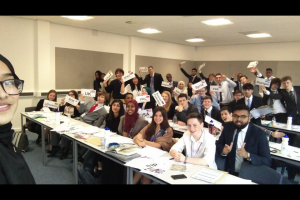 The General Assembly was also quite fun and the Egyptian delegation despite little recognition from the chair combatted lots of resolutions and delegates. One resolution commented on asking member states to withdraw support for non state armed forces which I pointed out was illegal and therefore any state doing so has broken international law and instead of being asked to withdraw support, these states should be prosecuted. The delegate struggled to answer my question and Egypt kept up a strong performance through out the general assembly. We were positioned towards the back so the chair struggled to see when we had a our plaque cards raised and unfortunately we were not able to ask as many questions as we would have liked. I really felt like I developed my confidence from participating in the model United Nations and would urge anyone interested to take part. Very few people research their topics in depth so even a little bit of research allows you to really get involved and make strong points to challenge others resolutions. I would like to give a shout out to the Cuban and Russian delegation who were also from Priestley College and argued very well. The Model United Nations was well organised and supplied us with free water bottles which unfortunately I lost. I made lots of new friends as well and the model United Nations was an all round very valuable experience especially considering it was free. The General Assembly could have been improved if the 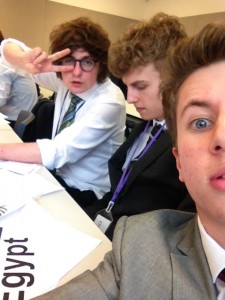 Ukrainian delegation who didn’t understand that  the Eastern European conflict at the moment is between Ukraine and independent States, rather than Ukraine and Russia. Because of this misunderstanding the Ukrainian delegation were really focused on instigating War and spent much of the general assembly insulting Russia. By the end  of the assembly it still seemed like nobody had truly grasped being able to speak in 3rd person and guest speakers participating in the Junior Model United Nations did a much better job at this.