Today, I read a rather shocking article by the BBC, entitled ‘The 10 Longest Hospital delays exposed’. The NHS is obviously a system which needs revamping, reorganising and millions of pounds invested in it to help it run. However, I found this article a very negative approach to what is happening. While yes, there is a chronic bed shortage and hospitals are overrun, there are still millions of people being treated each day.

The article does however, highlight again what I became aware of after watching the BBC documentary ‘Hospital’. This being, that many patients are occupying a bed in a hospital when waiting for a place in a care home, cottage hospital or specialised clinic. Consequently hospitals are ‘filling up’ as patients keep being admitted each day, but few being discharged. The links between these healthcare services are shown to be fractured, as sometimes communication between clinics, hospitals and care homes is not as frequent as necessary.

Aside from this however, the article does present key issues in the NHS. The greatest rise reported being 449 in a mid Yorkshire hospital. The graph clearly shows that the number of patients who see themselves as ‘stranded’ in hospital with nowhere to go for care when discharged, is on the rise, as has been clearly on the rise since 2014, and doubling the number of patients delayed in 2016 compared to that 2010.

For me, this highlights that many older patients who require access to care packages, including nursing home places and help in the home for daily tasks, such as washing and dressing, aren’t receiving this help. Quite possibly in the time that it takes for these links to be made, lives could be saved if other patients had access to these beds. The article also states that ‘Over the past four years, the number of older people getting help from councils has fallen by quarter, while the NHS district nursing workforce has shrunk by 29% in the past five years.’ To me, this screams lack of funding, and is an example of how cutting funding of the NHS has caused a cut in services, which has hindered the functioning of not only hospitals.   Aside from this, its is incredibly important to remember that these elderly people should also have dignity, and lives as independent and healthy as possible – this is not just being confined to a bed in hospital, unstimulated.

Restoring faith however, the article does mention that councils will be spending £16 billion this year on social care. This should help to reinstate the links between the services provided and provide those who should not be in hospital with adequate care elsewhere, and those who need hospital care access to that. Initially, this article sparked my anger, because I believe that the NHS is an incredible service which saves millions of lives, and to pick out the negatives is not necessarily representative. However, I am not naive enough to think that it is without its problems, but a system which deser 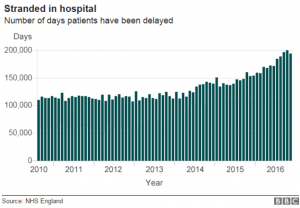 ves saving. Thank you for reading 🙂

This is the link to the BBC article…