Cerebral palsy is defined as a persistent condition marked by impaired muscle coordination (spastic paralysis) and/or other disabilities, typically caused by damage to the brain before or at birth. Around 1 in 400 people in the UK are affected by cerebral palsy. The life expectancy of a sufferer is not usually affected and this condition does not deteriorate with age.

The causes of cerebral palsy are due to:

The severity of this condition ranges from mild to extremely severe and these symptoms differ greatly from person to person.

There are five types of cerebral palsy;

Currently there is no cure for this condition, however treatments such as occupational therapy, speech therapists and physiotherapy are available to help improve the quality of life for the sufferer. 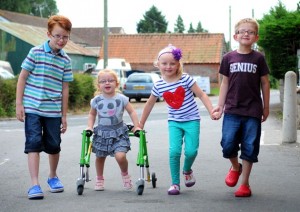 Scientists at the Harvard university have managed to recreate human beta cells that  produce insulin by use of embryonic stem cells, which will be potentially suitable for use in humans. These insulin-producing cells are nearly exact copies of the cells found in the body. This involves reprogramming human pancreatic duct-derived cells (HDDCs) to act like beta cells, and to secrete insulin in the pancreas, in response to glucose. This procedure will eventually lead to an end of daily insulin injections and the health problems associated with type 1 diabetes. The research was treated on animals and other primates and is said to hopefully, be used in humans in the next few years. By carrying out the procedure in this way, the scientists avoid potential genetic modification of cells, which may lead to risks, such as cancer. 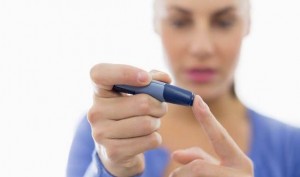 I have recently attended a conference on diabetes and asthma (which will be posted soon) and I was fascinated to explain my knowledge, here is what I found out:

The levels of sugar in the blood are controlled by insulin, which is produced in the pancreas. Usually glucose breaks down sugar in the bloodstream however if an individual is affected by diabetes this process cannot take place as there is not enough insulin to break down the glucose.

A group of scientists from California have realised he need to grow organs in the lab.  This method is a form of 3D printing, they concluded that DNA could be used, much like velcro is today, to stick cells together to form complex three dimensional structures.

This link below shows the process taking place:

The first implant, performed by surgeons in Manchester, was implanted into a patient affected by dry-age macular degeneration (MD) and as a result the patient had lost his central vision completely.

How the bionic eye works:

After the bionic eye was implanted, the patient was able to detect movement of lines on a computer screen. 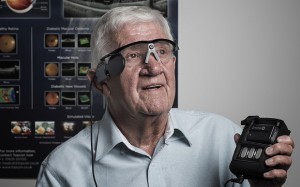 Image showing the patient who recieved the first implant of a bionic eye to cure dry age related macular degeneration.

I am currently doing an EPQ on hearing loss and specifically future treatments and the possibility for a cure in the future.

I came across some research done by scientists which involved inserting the TMC1 by use of AAV1, which is considered safe as a viral vector, into the cochlea of mice with genetic deafness and these were their findings:

The research was carried out by an international team comprising academics from the Department of Chemistry at the University of Cambridge, the Karolinska Institute in Stockholm, Lund University, the Swedish University of Agricultural Sciences, and Tallinn University.

Alzheimer’s disease is one of a number of conditions caused by naturally occurring protein molecules folding into the wrong shape and then  or nucleating  with other proteins to create thin filamentous structures called amyloid fibrils. Proteins perform important functions in the body by folding into a particular shape, but sometimes they can misfold, potentially kick-starting this deadly process

These researchers have found a molecule that can block the progress of Alzheimer’s disease at a crucial stage in its development, called ‘Brichos’. ‘Brichos’ is a molecule which has been shown to be effective at inhibiting the mechanisms which trigger the aggregation of the amyloid beta proteins. ‘Brichos’ prevents the amyloid fibrils from coming into contact with other proteins, thereby helping to avoid the formation of highly toxic clusters that enable the condition to proliferate in the brain.

By discovering this molecule, scientists have moved closer to identifying a substance that could eventually be used to treat the disease.

This breakthrough is certainly a very exciting finding, but it must be stressed that this study is still in its infancy and more research is required before ‘Brichos’ can be considered a potential treatment for Alzheimer’s disease. The researchers have now planned to undertake more studies to confirm their findings.

Ebola Virus Disease (EVD) is a severe and often fatal illness in humans.

EVD first appeared in 1976 in 2 simultaneous outbreaks, one in Nzara, Sudan, and the other in Yambuku, Democratic Republic of Congo. The latter occurred in a village near the Ebola River, from which the disease takes its name.

It is thought that fruit bats of the Pteropodidae family are natural Ebola virus hosts. Ebola is introduced into the human population through close contact with the blood, secretions, organs or other bodily fluids of infected animals such as chimpanzees, gorillas, fruit bats, monkeys, forest antelope and porcupines found ill or dead or in the rainforest.

Ebola then spreads through human-to-human transmission via direct contact, through broken skin or mucous membranes, with the blood, secretions, organs or other bodily fluids of infected people, and with surfaces and materials (e.g. bedding, clothing) contaminated with these fluids. Burial ceremonies in which mourners have direct contact with the body of the deceased person can also play a role in the transmission of Ebola.

People remain infectious as long as their blood and body fluids, including semen and breast milk, contain the virus. Men who have recovered from the disease can still transmit the virus through their semen for up to 7 weeks after recovery from illness.

Early signs and symptoms include:

Over time, symptoms become increasingly severe and may include:

To help stop the spread of the virus, we need to focus on:

I recently came across this in BBC News and found the concept extremely fascinating..

SMART (Sensing, Monitoring and Release of Therapeutics) bandages have the ability to analyse wounds. They work by glowing to indicate a wound’s tissue oxygenation concentration.

How does it work?

The key to these bandages is phosphors, a molecule that absorbs light and then emits it via phosphorescence. The bandage is applied by ‘painting’ it onto the skin”s surface as a viscous liquid which dries to a solid thin film within a minute. Once the first layer has fired, a transparent barrier layer is then applied onto to protect the film and slow the rat of oxygen exchange between the bandage and room air, thus making the bandage sensitive to the oxygen within tissue.

The emitted light is bright enough that it can be acquired using a result camera or mobile phone, opening the possibility to a portable, field-opening device.

This includes monitoring patients with a risk of developing ischemic conditions, postoperative monitoring of skin grafts or flaps, and burn-depths determination as a guide for surgical debridement (the removal of dead or damaged tissue from the body). 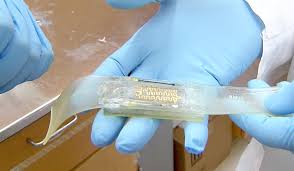 If you are breaking a sweat as to what colour this dress is, fear not I have the answer..

The colour of the dress is related to the way our eyes and brains work. The photoreceptors covert light rays into nerve signals which are then processed by nerve cells in the inner retina, sent to the brain, and then translated as images.

We have three types of cones, each is tuned  to pick up green, red or blue wavelengths of light. When light hits our eyes, the receptors turn these colours into electrical signals that are sent to the brain. Our brains determine the colour that we see by blending the signals that each receptor senses.

The lighting of the image, which is a bluish tint, appears to make the blue part look white and the black part looks gold. Some people’s brains are deciding that there is less reflection on a well lit blue and black dress. However, those who see it as white and gold are viewing it as if it is in shadow, but is more reflected. Our individual sensitivity to the blue background lighting of the photo is changing how we see the object in the image. 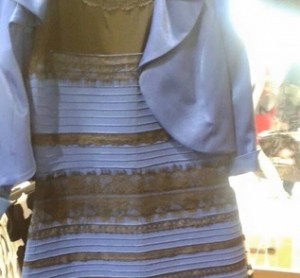