Recently a family member has suffered from two strokes in a 5 day period.  I was able to travel in the ambulance up to St George’s hospital as it has a specialised stroke clinic.  When I asked the paramedics about the stroke they said that it was a TIA not a CVA and they went on to quickly explain what both were which I didn’t fully understand so I decided to look it up!

TIA stands for Transient Ischaemic Attack.  It is usually called a mini stroke and the symptoms disappear after 24 hours.  It is caused by a section of a thrombus or atheroma/plague breaking off from the carotid arteries (there are 4) that supply the brain with blood or from a thrombus from the heart.  The arteries that become more narrow as they they move further towards the brain, this makes it easier for the blood clot carried in the blood (now called a embolus) to become stuck.  However, because the blood clot is small it easily breaks up so no permanent damage is caused to the brain tissue.  However, TIA should be treated like a stroke as it’s a sign of a stroke occurring. 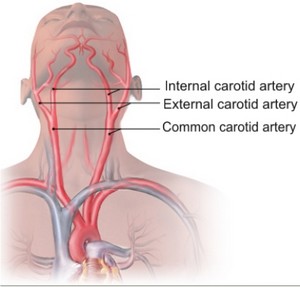 CVA stands for Cerebral Vascular Accident.  This is when the brain has been starved of oxygen and permanent damage has been caused resulting in a loss of brain functions.  This can be caused by ischemia (embolic) or a haemorrhage.  An ischemic stroke is where a blood clot blocks an artery in the/supplying the brain which doesn’t break down like in a TIA and starves an area of brain tissue of oxygen resulting in the brain tissue becoming damaged/dying.  There are two main types of haemorrhagic strokes:

An intracerebral heamorrhage is where there has been a bleed in the brain which could be caused by aneurysms and/or arteriovenous malformations (AVMs)- this is where blood vessels in the brain (on on the surface) become tangled and bypass an area of brain tissue and the blood go straight from the arteries to the veins missing out capillaries. 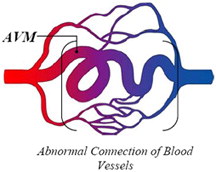 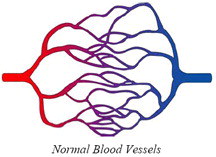 A subarachnoid stroke is where a blood vessel has burst or ruptured usually due to an aneurysm and blood has collected beneath the arachnoid membrane which lines the brain. 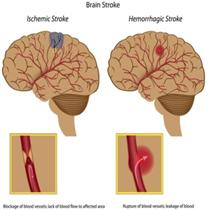