With the British populations increasing involvement in organised sports, the occurrence of head injury and concussion is on the rise.

Concussion comes from the Latin word concutere meaning to shake and is defined as ‘Any transient neurological dysfunction as a result of biochemical force’ or in more simple terms- a sudden, short-lived loss of mental function occurring after a blow or injury to the head. It is the most common but least serious type of brain injury.

Symptoms of concussion can include loss of consciousness, loss of memory or no recollection of events before or after the trauma occurred, headaches, vomiting, loss of balance, trouble reading, and writing, listening or speaking leading to confusion. In younger children changes in behaviour may be noticeable and clear fluid leaving nose and ears-this could be cerebrospinal fluid which usually acts as a cushion and immunological protector for the brain, although this could be confused with regular mucus leaving the nose.

During a concussion there are biochemical changes within the brain such as the release of neurotransmitters and unchecked ionic fluxes. Further neuronal depolarization with efflux of potassium and influx of calcium (ionic shifts) leads to rapid changes to cellular physiology. The Increased action of the sodium-potassium pump increases glucose metabolism, leading to disparity between glucose supply and demand which results in a cellular energy crisis. This can be measure using a positron emission tomography, a method also used to diagnose Alzheimer’s. The deficit means there is a period of depressed metabolism where the patient is more vulnerable due to slower reaction to a second concussion which may lead to longer-lasting deficits.

Although long-term effects of concussion or post-concussion syndrome is rare, due to the increasing occurrence of concussion it is becoming a more serious pediatric health problem. Moderate to severe traumatic brain injuries (TBI’s) have symptoms similar to those of concussion but have more long term health risks, with particular problems in concentration, processing information, solving problems and decision making. Despite the brain having the best ability to re-organise its self and make new connections during childhood, research shows they usually take longer to recover that adults with a similarly imparting injury. This can by an issue as children can often understate symptoms, especially in sports, so as to continue playing as soon as possible. On the opposite end of the scale some may exaggerate so as to avoid things such as school. Hence why doctors must be wary during examinations and parents are recommended that complete inactivity isn’t often advisable.

Despite female involvement becoming increasingly popular, the most dangerous sports in the UK in terms of concussion are football and rugby which are historically male dominated. Although female gymnasts frequently obtain minor head traumas due to sheer impact of their landings. I believe that involvement in more ‘aggressive’ sports and lower teenage dropout rates could be a contributing factor as to why male exam results are often lower than females of the same year, as they are more susceptible to brain traumas. The 2014 GCSE results showed a 8.8% difference between proportion of girls getting grades A*-C compared to boys, the largest difference in 11 years, although the gap is greater at Grade C and above then at A*

In most UK secondary schools, both rugby and football are large contributors to the boys PE course throughout the Autumn, Winter and leading into Spring. Given that exams take place in the Summer term, the majority of the course is taught in conjunction with these ‘more dangerous’ sports before the focus is shifted towards revision later in the year. This means that the initial intake and retention of knowledge when a topic is first introduced has a greater chance of being compromised due to an increased risk of unidentified head injuries.

This leads me to question many things:

*Is this the reason that boys are often seen as ‘last-minute merchants’ when it comes to exams, by out-performing their predicted grades following intense last minute revision?

*Is this why boys are only matching or out achieving girls in subjects that involve less factual knowledge and more mathematical problem solving?

*Is changing exam structure to decrease gender gap unfair to girls who often need to out shine their male counterparts to achieve jobs later in life?

What are we doing prevent long term damage?

As a fan of rugby it would be hard not to notice the increased caution surrounding head injuries in recent times, especially at the higher levels. Changes in head injury protocol include incorporating the removal of players seen to be involved in head collisions, or injuries from the field of play to partake in head injury assessment. This has reduced the occurrence of multiple concussions hence reducing long term effects. Returning to the sport at all, following multiple concussions within a period of a few seasons is also being handled with upmost caution. Notably with George North, following multiple collisions and knockouts within the same season that lead to significant discussions about the continuation of his career.

Israel Folau, a household name of Australian and international rugby, recently advertised the use of a wearable tracker to monitor head impacts throughout a game. The brainBAND is a product of the work of Dr. Alan Pearce and Braden Wilson, currently being trialled as a prototype. Using sensors at the back of the head, impacts are measured in real-time with information being shared with medical teams, Coaches and referees so they can carry out the appropriate action, as well as being logged so that over time each player can see a more complete picture of their individual head-injury profile.

At younger ages there is talk of adoption the New Zealand approach of creating weigh bands within age groups to minimise size difference and subsequently the difference in force between players during tackles. This occurs within some U18 school teams already when talented younger players (U16) who wish to contest at higher age groups must have sufficient levels for grip strength and height to match that of the top year within the age group. The current proposed age-weight grouping used in New Zealand are similar to the following based on national percentiles. 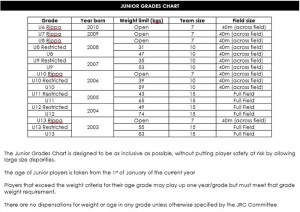