To prolong life further than has already been achieved, is an ongoing battle faced by scientists and medics worldwide. Hence in appreciation of the innovative research proceeding internationally, the 7th Annual Science Week held at Manchester’s Science Museum ventured into multiple studies of Israeli scientists, conducted to relate to the A level Biology curriculum.

Varying studies are in development, one of which is rejuvenation from aging. Why do we age? What are the mechanisms of aging? Do we all age the same? If so, what are the factors affecting it? In light of answering these questions, Triana Amen has focused her research on the biochemistry and genetics of yeast and folding proteins as well as their relationship with cell function, aging and rejuvenation. Firstly, aging is universal, she explained, all humans are composed of the same cells and despite different tissue types aging at different rates, there is an inevitable decline in cellular function. It is accelerated by external contributors’, for instance environmental factors and the accumulation of damaged components. To illustrate the influence of these factors, she gave some examples, mice which are fed less supposedly live longer, moreover, in humans, those with a caring family and with less stress are correlated to live longer. Contrary to this, are internal contributors such as genetic background which can affect the rate of aging, for example Progeria is a rare genetic disease can lead to very fast aging of cells sue to a mutation in every cell nucleus, hence those with the disease don’t tend to live further than their teen years. Combating aging begins with understanding its mechanisms, thus Amen described that during the life of a cell there will be gradual changes that ultimately lead to aging factors to form. Proteins are essential in the life of a cell since they are used in its chemical processes, take for example enzymes (used in digestion and breaking down dead matter in cells) and ribosomes (used to make amino acid chains from reading DNA), the proteins have very specific structures known as a quaternary structures formed from several proteins arranged in unique positions to achieve a specific function. Any small variation such as a misfolding in this structure, leads to its malfunction. Aging factors are misfolded proteins which can acquire alternative Proterotoxic states (essentially they become toxic) and a domino effect occurs of deleterious molecular events resulting in cellular dysfunction. Unfortunately it can be passed down via mitosis in humans. If this occurs in the brain neurons for example, age-related neuro-degenerative diseases develop.

Unusually however, yeast cells deviate from this trend. When yeast divide by mitosis, the mother cells present more aging factors every generation yet they continue to produce young daughter cells. This asymmetrical pattern is done by organelle association by the cytoskeleton and a diffusion barrier, which filters out all the misfolded proteins, keeping them aside in the mother cells and preventing them to be passed on therefore promotes rejuvenation. So the burning question, can we use the mechanism used by yeast with human cells? Well, sort of. Embryonic stem cells have the ability to asymmetrically divide. Some organisms’ use their stem cells in a phenomenal ability to regenerate entirely new limbs, for instance worm cells divide so quickly that if its head is cut off it will regrow a completely new one! Again unfortunately, this is not possible in the human body as this type of sudden cell division can become uncontrollable, forming cancerous tissue instead. However it is not all hopeless, the most striking research in stem cells of the modern age are the multiple successful organs grown in vitro with successful transplantations. More interestingly so, adult stem cells, which only have selected number of cell types they can differentiate into, can now be converted to embryonic stem cells, which have the ability to turn into any cell type. For instance Hannah Warren was born without a trachea and had a completely new windpipe cultured from her own stem cells as well as plastic fibres. Opening up to questions at the end of her talk, Amen answered my question to how significant the effect of telomeres had on aging. Telomeres are compounds occurring at the end of chromosomes that are important in the replication of chromosomes and its stability. She described that every time a cell replicated itself, the telomeres shorten in length which ages the cell as the telomeres allow the cell to replicate a certain number of times, approximately 50 divisions. Another question was the use of anti-aging creams, in which she casually replied were completely placebo.

Transition to the next speaker, Dr Fahed Hakim’s talk was most appropriate for the many students attending who struggle with the constant battle of whether to sleep early before an exam or grab a few more hours of last minute revision. Dr Hakim completed a postdoctoral fellowship in paediatric sleep medicine in the USA, writing many publications especially on the topics of sleep medicine, asthma, shisha smoking and cystic fibrosis treatment. Alongside this he is currently conducting research at the Technion (The Israel Institute of Technology) on his interest of the effect of sleep disorders and sleep disruption on human metabolism and obesity development, the immune and inflammatory systems, brain functions and the initiation of cancer. Undeniably, after learning this I was prepared to accept any and all the advice he was about to give! Using an EEG (an electroencephalogram is a test that detects electrical activity in your brain) on multiple subjects, Dr Hakim stated that the brain is 10% more active during sleep to allow the events and information experienced over the day to be ‘cleaned’ and organised. An experiment to investigate the percentage of syllables learnt with ranging hours of sleep, presented a positive correlation that the more hours slept, the more syllables the test subjects remembered after they woke up, hence he deduced that additional sleep increases cognitive skills. In addition to this, those with fewer hours of sleep experienced a decrease in temperature, heat seeking behaviour, increased food intake, weight loss, increase in metabolic reactions at rest as well as increased blood plasma. To say the least, it is very counter-intuitive to stay awake and most certainly will affect your potential performance the following day.

In our very technological era, artificial lights from street lamps to smartphones and TV screens, are constantly manipulating control over our sleep. This is apparent when looking at our light homeostasis mechanism which strongly influences our physical, mental and behavioural changes over approximately 24-hours, otherwise known as our Circadian Rhythm. Endogenous (i.e. naturally produced by the body itself) sleep-regulating substances build up in the body’s cerebrospinal fluid during the hours we are awake, causing our pressure to sleep to increase the more it accumulates. The only method to reduce these chemicals is to sleep itself. Dr Hakim was researching on a specific sleep-regulating substances known as Adenosine. After a critical point of Adenosine has bound to brain receptors, the nerves are triggered to slow down and allow the body to entre sleep. In our daily lives however, we consume other neurotransmitters similar to Adenosine which can cause a counter-effect, the most popular is caffeine. Caffeine competes with Adenosine for the receptors in the brain, resulting in Adenosine not being detected and in turn, nerve activity remains at optimum rate. This makes us significantly more tired by the end of the day and less sensitive to rhythms of wakefulness and sleep as part of the body’s natural makeup. Blue light is correlated to wakefulness by the brain, however exposure for too long results in increased blinking, especially with light from screens, causing irritation to the eyes and a decrease in vision. So how much sleep do we need? For children, the growth hormone is given during sleep hence it’s recommended they receive 12 hours. Teenagers between the ages of 12-18 require 9 hours and adults need 7.5 to 8 hours. Less hours increases the likelihood of nightmares, sleepwalking, sleep talking and morbidly so, age-adjusted relative risk of mortality. Still within the bounds of disrupted sleep, Dr Hakim ventured into an experiment to study the connections between cancers and sleep deprivation. Mice with tumours were kept in a cage, every 2 minutes a bar would move across the cage and nudge the mice, forcing them to stay awake. This resulted in the tumours growing 3 times the rates as well as producing more invasive cells! To end his rather alarming talk, Dr Hakim remarked that ‘there is no elevator to success, you have to take the stairs.’

On a slightly different agenda, throughout the day, various video clips of the sheer range of technological advancements in Israel were played on the topics of:

Personally, my favourite clips were on brain imaging and a new device known as PillCam. The brain, despite a surge of interests by scientists, remains the least known organ therefore brain imaging is a useful technique for understanding the brain’s complex structure and function thus an example for its potential is to identify children who are at a risk of developing the symptoms of autism, to ensure that intervention is made early. The EGG weighs 3kg and is being used to try and find a diagnosis for autism by the age of 1 years old rather than the current diagnosis by the age of 3. PillCam is a small device, approximately 2 cm in length, which is painlessly swallowed, thence passes through the digestive tract and is eliminated via egestion. During its journey through the system, cameras at both ends of the pill record images that allow a physician to diagnose intestinal disorders so they may be treated without the patient having to undergo intrusive and painful exploratory surgery or very uncomfortable endoscopies. In addition to this, I was given a model of the pill itself: Here is a clip of the procedure and an animation of the pill in action. 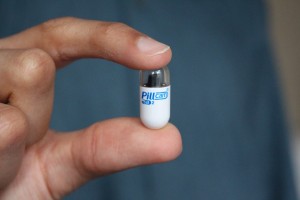 On such diverse subjects within medicine, the day was most certainly informative and consolidated my ambitions to pursue a career into the human biology as well as encouraged me greatly to research into these phenomenal topics further. Upon the event I have read books such as ‘How We Live and How We Die: The Secret Lives of Cells’ by Lewis Wolpert, which speaks in more detail of the chemical reactions and mechanisms of human cells, as well as reading and blogging on research papers written by the scientists who attended the event and related articles on hypnogogic jerks, sleep paralysis and lucid dreaming. Undoubtedly a fantastic experience which was both educationally engaging and scientifically striking.

They also recommended us to read on some more medical innovations, of which include: