Currently and over the past week, I have been working as a volunteer at Hamad General Hospital in Doha, Qatar, whilst also gaining some work experience for a Future Doctor’s Programme. My reason for choosing this rather unconventional location is to hopefully compare how the healthcare system works in a country which is rather rapidly constructing itself into a very industrialized, modern and rich society, to the NHS at home which is well known for its highly developed system. My aims were to uncover the differences in issues faced here to those at home, as well as understand the workings of the hospital here since it is in a Muslim country during the religious month of Ramadan (in which Muslims fast for a 30 days, eating only before sunrise and after sunset). Quite clearly Qatar is known for its wealth, with selling vast amounts of oil (costs about 20 pence per litre of oil which is also cheaper than buying water here!) and holding the World Cup in 2022, there are great expectations for the country. It is hard not to ignore the sheer amounts of money being invested to change this once empty dessert into a city from the future, as demonstrated by there great number projects. Hamad Medical Corporation is so large that it provides as the main source of public healthcare for the entire state, hence in Doha, patients can come from the complete opposite side of the country to receive treatment. The hospital is planning to further expand, building new facilities for dentistry and diabetes.

I have had the privilege to be supervised by Dr. Mohammed Anizan , who works in respiratory therapy. He spoke to us in detail about the applications of ventilators in the hospital by taking us to various departments to see the types of ventilators used in each setting and patient circumstance. 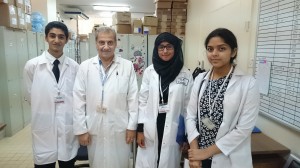 Before setting off into the hospital, Dr Anizan gave us an introduction into respiratory therapy and the types of people who need this treatment. He explained that respiratory medical problems are sectioned into the mouth, neck and lungs and that the medical treatment for the diseases affecting each individual area are very unique, for instance in the lungs, alveolar diseases such as TB, Pneumonia and pulmonary edema are treated differently than diseases of the windpipe, such as Asthma, Bronchitis and cystic fibrosis. This moved us swiftly onto respiratory problems from trauma injuries and the mechanical ventilators used in ICU. By using the graphs presented by the ventilator, you can identify the types of modes (i.e. pressure, amount of oxygen, etc) needed for the patient. They had a variety of ventilators, some with jackets that inflate and deflate at high pressures for patients with difficulty expelling air or who have obstruction in their lungs or airways, for example mucus. Other ventilators included invasive ventilators which required the patient to be asleep with tubes entering their airways.  After Dr Anizan provided examples of different tubes, mouth pieces and masks for neonatal, pediatric and adult patients, we began moving around the hospital.

Short-term Paediatric ICU: The majority patients here were not ill due to birth problems of their lungs or injury, but rather infections. Therefore despite being youthful with healthy lungs, they have weak immune systems, so vaccinations are very necessary to prevent illnesses as it can leave a child desperately poorly. Therefore most of the children were asleep to allow the ventilators to be placed into their windpipe but they were unlikely to be on them permanently.

Long-term Paediatric ICU:  These children had chronic problems, such as disabilities, that may leave a breathing complication. Therefore special ventilator tubes are entered directly to their trachea from the neck instead of the mouth, to allow the patients to be awake, breathing and talking, instead of left to sleep for long periods of time for the ventilators to work. Dr Anizan began to explain the graphs presented by the ventilators, for instance a Flow-Volume Loop: 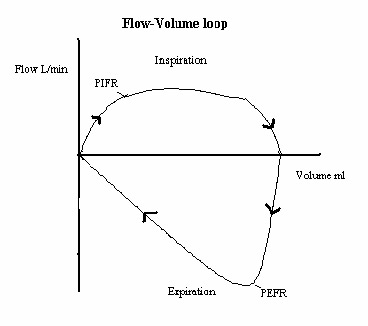 However minor changes of this loop can explain different breathing problems being faced by the patient or even difficulties with the ventilator to support the patient, such as a leakage of air or not enough expiration/inspiration time. Air leakage can be seen by the expiration line meeting the x axis earlier instead of the origin. 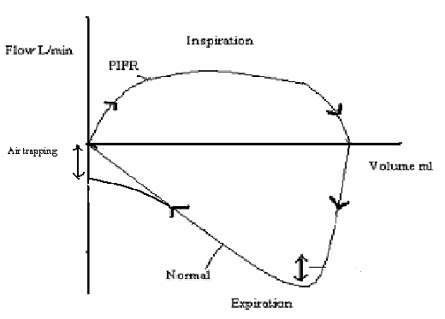 Air trapped in the lungs as displayed by expiration line meeting the y axis instead of the origin. This maybe due to obstruction in the airways or the machine may not be giving the patient enough time to expire the air.

Similarly, asthmatic patients who have increased expiatory resistance from thick mucus secretion and narrowed lumen of their airways can experience characteristics from the 2 graphs below. 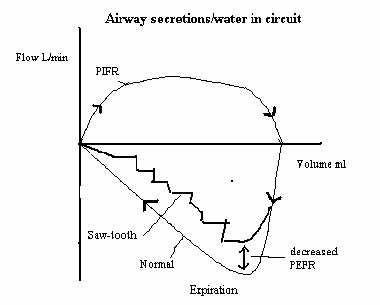 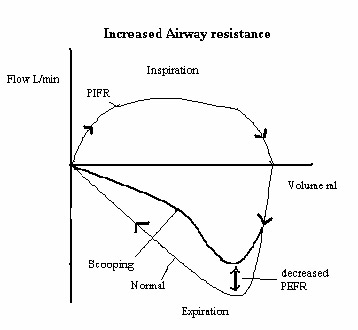 Trauma ICU: The economic and social stance in Qatar is different to that in UK as Qatar is still advancing and unfortunately the life of construction workers is very hard. They have to work in temperatures between 40 to 50 degrees Celsius this summer, are on construction sites which are very unsafe and live mainly in work houses. The effects of this could be seen in trauma ICU, for example I met patients who had fallen off the 3rd story of a building construction site! Here majority of the patients were completely dependent on the ventilators, though there were some presenting abnormal breaths such as gasping, possibly due to blood in their lungs. This was very difficult to observe at times since the injuries was very severe, however the hospital was very equipped for these circumstances and the patients were very well looked after.

Surgical ICU: Similar to trauma ICU, the patients in this department are set for surgeries, for instance organ transplants. At Hamad General Hospital, there is construction to increase the size of this department. Many patients here were also in recovery from surgeries. Special isolation rooms were allocated for those patients pending for surgery who were also infection risks to other patients.

Medical ICU: This department is dedicated to patients with illnesses, diseases or infections requiring critical attention. Here we saw a very unique ventilator machine known as ECMO, which are an artificial set of lungs, providing oxygen and removing oxygen from blood directly whilst it circulates outside the body into the machine. The purpose of this machine is to give the heart and lungs time to rest and slowly recover but not cure them of their illnesses. As a first impression, the hospital was undeniably well facilitated. The variety within the specialty of respiratory therapy has presented an abundance of applications throughout the hospital. To have seen so many within the first day was very impressive and left me anticipating the departments over the next few days.