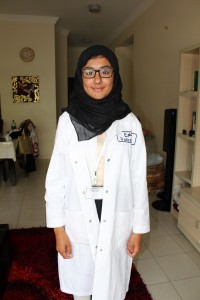 Yet again Dr Anizan briefed us in the morning with today’s topic mainly on radiology since the CT scans in Hamad General Hospital (HGH) are the only free and public CT scans for the entire country, hence they have a very large radiology department. He spoke about the main types of scans (i.e. X-Ray, CT, MRI & PET scans), the differences between them and in which cases you would use each type of scanner, though unfortunately HGH do not own a PET scan. 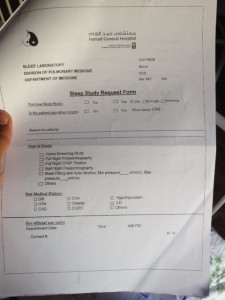 The sleep labs were rooms where patients with problems such as strong snoring or obstruction of their airways, were allowed to sleep to allow the doctors to identify the cause of their disrupted sleep. Unfortunately we could not see any patients since they would obviously come in the evening for the sleep test. Above are the forms the doctors complete to record the severity of obstruction of the throat and the type of tests they perform.

Bronchoscopy: This is an instrument used to look into the lungs or airways, which has a camera on one end. The patient I saw needed a sample from the lining of her lungs to be tested as she had supposedly caught Tuberculosis that was dormant. For infection protection reasons we were given face masks that filtered 90% of the air. She lay down on her side with her right arm over her head. The doctor then performed an incision on the side of her chest before placing the bronchoscopy in. He filled the cavity between her pleural membrane and the lungs with air and fluid to allow the area to be clear in order to better see the lungs from the camera and to allow better access to take a sample. Another instrument which was a long pole with a small claw at the end was put through the bronchoscopy to pick a small sample. The women during this time was sedated but could still feel a slight uncomfortable pain. From this I learnt that there was great need for infection control as we kept washing our hands and keep our masks on. As much as the patient needs to be cared for, doctors need to be able to protect themselves also and not to put themselves and others in risk.

Hyerbaric Therapy: For those who have strong burns or areas of skin that does not have a blood supply, a hyerbaric chamber allows for oxygen to be directly taken up by the skin to allow for faster recovery. Thus the chambers have a very high concentration of oxygen. Unfortunately we were unable to see the therapy chambers since it is secured if a patient is inside for safety reasons.

My final day with respiratory therapy and it was fantastic! I have learnt the need for protection from both infection and machinery. For my final two days I spend one day in male emergency and another in female see and treat!