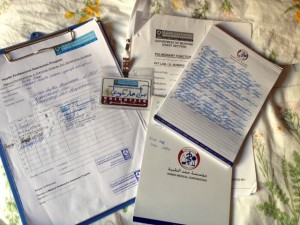 Upon leaving for work experience everyday, I prepare my note books, lanyard, lab coat and hours checklist. For respiratory therapy I had a set supervisor who guided me, however for my emergency work experience I had to politely ask the head nurse and head clinical doctors if I could shadow a doctor. Though this was a daunting experience at first, I preferred the independence and it made me more comfortable with approaching new people. I came to realize that the professionals were extremely friendly, which made me feel less intimidated and I learnt significantly more about the problems faced in Qatar, the improvements made and the different departments by talking to so many doctors. Being off timetable also was very liberating since I was able to enter the sectors that I found most interesting.

In Qatar, as a Muslim country, the main difference you see in the hospital is that every department is separated in female and male departments, including the pharmacy and outpatients units. Here the vast majority of patients were discharged. The most critical patient we saw was a man in his 50s who had a diabetic foot and though he looked relatively well, he was rushed into emergency with extraordinarily low salt and water levels. To make matters very complicated the man had a stroke and fractured his foot in the process. Therefore the patient needed immediate drips to hydrate him and increase his salt concentration, despite it not being highly recommended since he was diabetic. The doctors in this situation communicated well, calling all the appropriate departments to have specialized doctors check his case. This highlighted the teamwork skills required in a working environment, with the consultants reviewing the patients history and checking his vials, whilst nurses continuously called other departments and proceeded to give the correct medication accordingly, despite being in such a crowded setting. I must remark it was also interesting to view the ethnic diversity in both the patients and the doctors, I met people form India, England, Pakistan, Ghana and the Philippines.

I soon discovered that the majority of the patients were discharged as sometimes there are a lot of misunderstandings and small incidences. For example one patient who was quite young, possibly in his 20s, did not wake up in the morning after his friend tired after continuously for a few hours, therefore he called an ambulance and 10 minutes later the patient woke up. He was diagnosed with exhaustion so was quickly discharged. Since the health care system is completely free and the public don’t pay any tax whatsoever towards it, people use this privilege well when they may not have done otherwise if they were paying for it after a small injury or incident.

Despite it being an adult male ward there was a patient aged 16 who had overdosed on some tablets which his brother had supposedly taught him were sleeping tablets. This stuck me since it was such a peculiar case and arose much suspicion of the child’s social life at home, therefore a psychiatric doctor came to review the patient after the emergency consultant suspected some mental issues alongside this. The felxibility of the doctors to be able to accommodate to such different cases so quickly during rounds is a very unique skills since it requires sharp cognitive abilities. This presented to me the academic side of medicine, which requires doctors to understand a range of different data, whether it be from an x-ray or blood test results. Above all I wanted to understand the working of the hospital in Qatar, henceforth I asked the emergency doctors the problems they have realized from working in A&E.

Emergency was great much like the rest of the hospital. Disregarding the small social problems faced in Qatar, the hospital was well functioning and it astonishes me that the country can afford to uphold a completely free healthcare system! I continued to learn the following day in Female see and treat in the emergency department.