After my very informative first day, I was stationed in the second radiology department at Wythenshawe Hospital responsible for patients referred from their GPs, inpatients or from other outpatient departments, rather than emergency patients. My timetable set me on a rotation to a different sub-specialty every hour, which left me exhausted by the end but kept me very busy and interested.

Wythenshawe hospital is a chest specialist hospital therefore they have an entire room dedicated to chest x-rays which allows for quick digital imaging of patients. Due to its swift nature I saw patients of a variety of ages and fitness. The x-ray machine was on the wall and the patient is instructed to lean their chin on a rest which in turn places their chest on the centre of the x-ray board. This is done stood up and if the patient had limited mobility (e.g. over weight or old) they would hold the handles behind the board, which positions them in such a way that the shoulder blades move to the side exposing the lungs well. Younger and more flexible patients would place the back of their hands on the back of their hips which has the same effect. 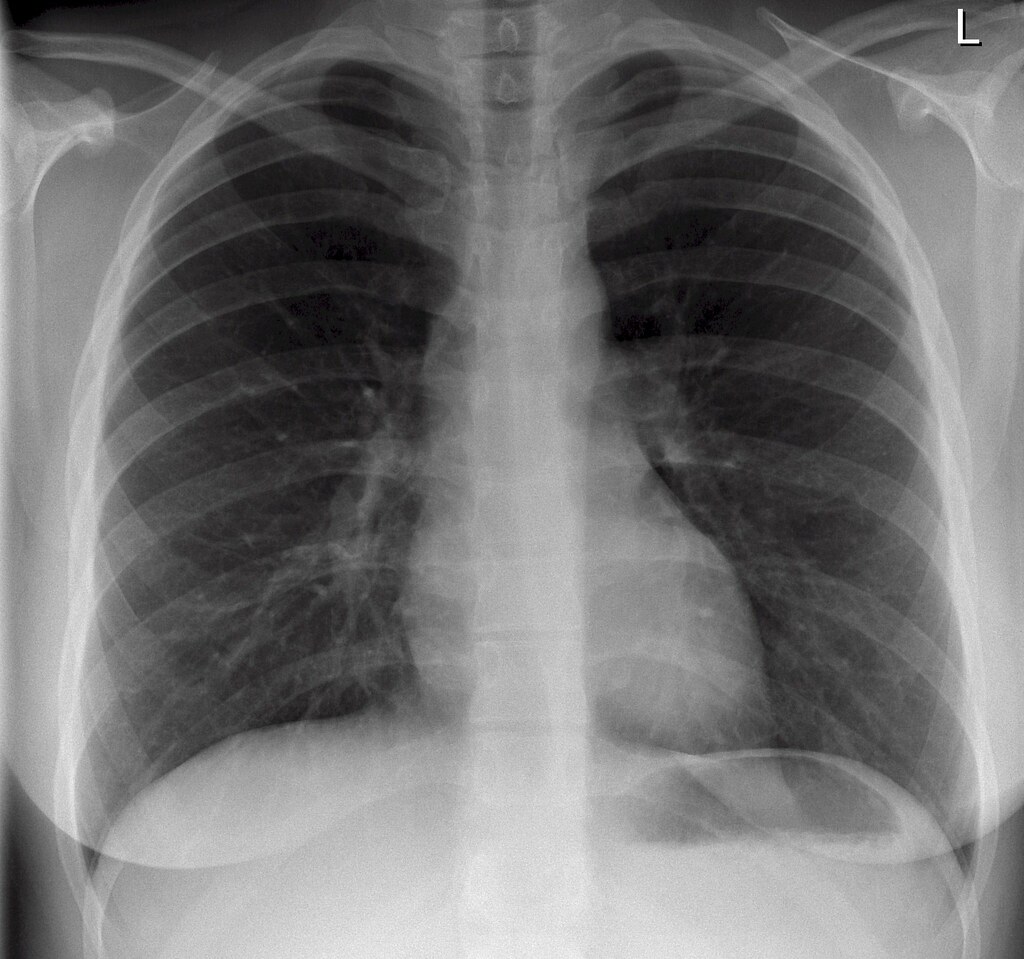 The x-ray image is taken at full inspiration, which allows the contents of the lungs (e.g. scarred tissue, infections or lesions) to be better noticed against the black background of air. I asked the radiographer what difficulties arise when a disabled patient, in a wheelchair, cannot stand for the scan, she replied saying that though it is not greatly helpful, the scan is done whilst they are in their chair by moving the x-ray board down, however the chair does appear on the scan itself. The nurses were very good at small talk with the patients and relaxing the environment. With very few follow-up patients, some are nervous since it may be the foundation of their diagnosis. hence I saw the necessity of creating rapports with patients despite each appointment not lasting 5 minutes. The nurse did mention that seeing the follow-up patients improve was fascinating, for instance a 50 year old man we saw who had undergone a lung transplant, went from hardly being able to stand on the x-ray machine to his final scan to being very active and talkative. Unfortunately the nurse also mentioned that in her career she has seen a huge increase in the number of patients referred for chest scans due to risks associated with drug and alcohol abuse, especially in younger people.

Here referrals would include x-rays of various part of the body and unlike the chest x-ray machine, the images would not appear instantly on the screen, instead they have to be downloaded from a x-ray board which is placed under the appropriate body part requiring a scan. As I was speaking to the radiographer she mentioned that due to the dosage of x-rays given to the patient, the reasons for referral always have to be well justified (known as diagnostic consent) hence as part of her job it is not uncommon for her to deny requests despite complaints from doctors. There is no set dose of x-rays a person may have since it is always given on demand for instance onset from an RTC, however with younger patients a MR scan is always preferred despite it costing £500 per scan due to the exposure of x-rays.

The first patient we saw was an inpatient in bed who required a scan of his chest and foot. Two scans of the foot (one on its side and one from above) are needed to clearly see all bones, however since this patient was in extreme pain, with a cast on his foot and laid down, to position his food appropriately was difficult and consequently left the patient in pain (and later given paracetamol on his ward). Other general scans were of hands, abdomen and hips. Spine was particularly difficult since the board is placed under the bed hence it is moved often to be parallel to the mid-line of the abdomen. This also has to be done on the patients side.

It was interesting to see the range of machines, doses and boards which were chosen by the team for each scan type and patient. Moreover many of the patients were old, or with very fragile and tender body parts requiring to be scanned, hence the radiographers knew their anatomy well and were very careful in positioning the patients to not cause them too much pain alongside not damaging the patients fragile bones or tissue. Unsurprisingly during the summer the department is significantly less busy since many of the consultants are on holiday however normally the department is overflowing with so many patients that there are queues leading out of the radiology reception door – certainly the radiographers need to be able to work quickly as well as sufficiently.

Here patients with pain in their hips due to many factors for instance wear and tear, are given a steroid injection guided by an x-ray machine. I saw no young patients, though apparently it is not unheard of either at the department. The procedure was lead by a consultant who was teaching a registrar practicing for the first time therefore I was able to learn the steps in the process. The patient is laid down on a flat table with a x-ray machine positioned above the hips on the appropriate side of the arthritis. A long needle is pierced steeply and quickly into the hip joint to cause as little pain to the patient and the consultant was well experienced without having to feel the hip too much with his hands beforehand ( good skill particularly if the patient is overweight) hence upon x-raying the needle it was always in the joint. A contrast is put through the needle first and x-rayed (appears black) to ensure that the fluid will enter exactly into the joint itself.

Moving swiftly on, nuclear medicine is the use of isotopes injected into the body to create images from the radiation emitted and recorded by a machine. There are many uses of this for instance myocardial infusio, however since it is a very long scan (as the radiation is released slowly and pictures are taken in slides) I only saw 1 scan of the parathyroid glands which were supposedly overactive. Funnily enough, partway through this long scan where the patient had to remain still for up to half an hour, the fire alarm went off in our department, however the neighbouring departments did not have an intermittent alarm and no fire could be found thus suggests smoke. This didn’t last so the patient remained on the scan. 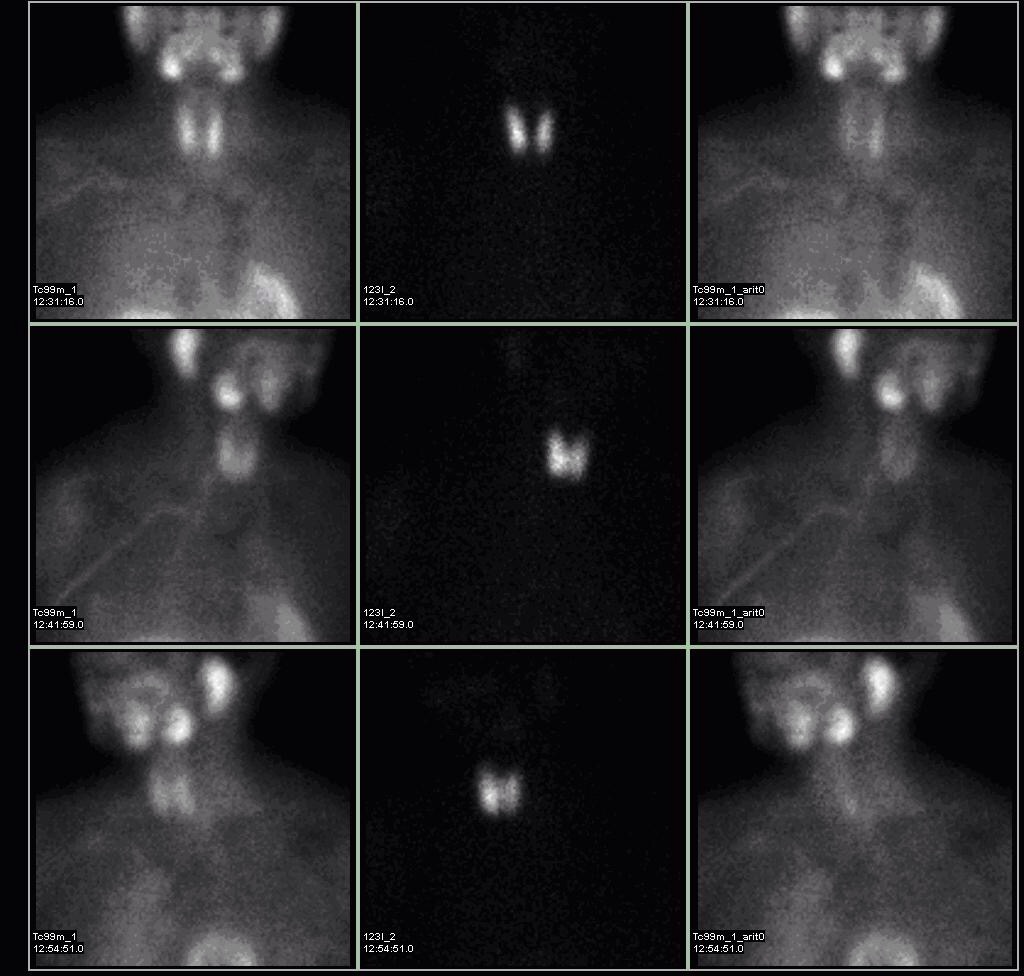 Additionally, scans of the bones are also conducted of which the radiographer found some examples to show me.

In the diagnosis for the bone scan was to check for the spread of bone cancer. She explained that the main isotope used is technetium since it has a good half life of 6 hours and this is enough time to allow all the scanning to be completed.

Since the hospital is the main lung hospital for the north west, they have many facilities dedicated to cystic fibrosis, lung cancer and other lung related diseases. 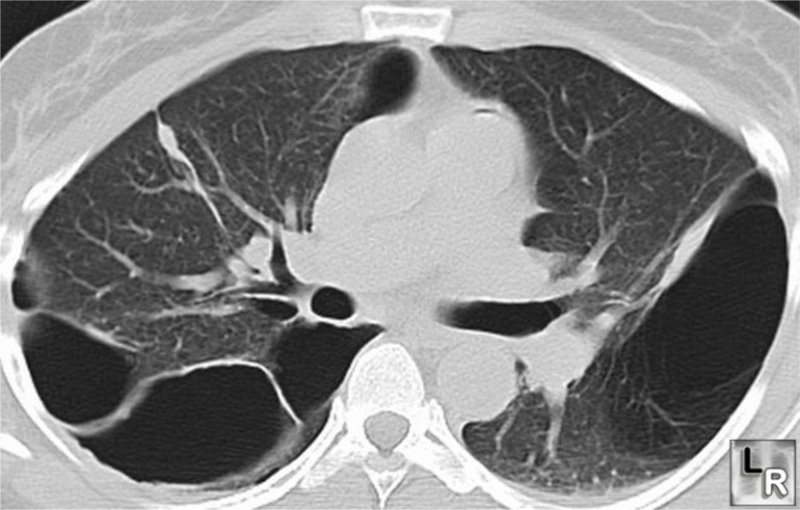 Hence many of the CT scans taking place were of the lungs. One patient who was in particularly bad pain, could not lie down flat on her side, therefore despite it not being ideal, she was put to lie down on her side. They are told to lie down on their back with their arms above their head.