Last December, I attended the annual Christmas Lecture held at the Manchester Royal Infirmary as presented by the Manchester Centre for Genomic Medicine. The talk sought to provide an insight into their professional sector, whether that be from within their labs or interestingly besides a super computer, as well as introduce us into genetic variance and the lengthy process of genetic diagnosis and prognosis.

Broaching the anatomical side first, an introduction into Eukaryotic cells was explained (it was simply revision for me, however I’m sure some of the audience hadn’t studied Biology for a long time). They explained as humans we are made out of trillions of cells, constantly dying and duplicating via the process of mitosis (cell division). This takes place due to a command centre within our cells, called the nucleus, of which holds all our genetic information in the form of DNA. The speakers were all dressed colour coordinately and presented their roles within the Genome Department in pairs, as to reflect the DNA pairs constructed from 4 bases, hence Adenine pairing with Thymine and Guanine with Cytosine. Of course in order to exhibit ones genomics, DNA needs to be extracted first. A group of volunteers took to the floor for an experiment to extract their DNA by the homogenisation (bursting) of cheek epithelial cells resulting in a cloudy, string-like substance floating on the surface of the solution – this is DNA extracted to be visible to the naked eye. Though if not more fascinating, squeezed into each nucleus, DNA is 2 meters long when stretched end-to-end! 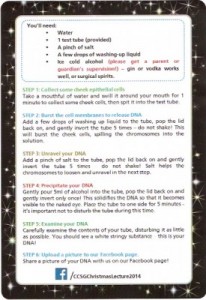 Within every human, cells are divided by the many specific functions they hold in the body, such as beating cardiac cells or photo receptors in our eyes, as coded by our DNA, so what makes us uniquely different from each other? The answer is variations in our DNA sequence and DNA mutations. This sounds rather daunting when the biology behind it is not explained, thus to understand the significance of mutations another test was run by the genome team. This time I volunteered myself also, each volunteer was given a strip of paper coated with a specific chemical and told to hold it on the tongue for a few seconds. Some had no reaction, whereas myself and a few others cringed at the bitter taste, this is due to a specific mutation found in 50% of the population, that results in an immunity from experiencing this taste and occurs since birth. Funnily enough this chemical is very similar to that found in brussell sprouts, hence could explain the popular distaste for them. However, some mutations from birth and during your lifetime can be harmful.

In order to diagnose patients with these harmful mutations or rather genetic diseases, the Genomic researchers work hard to find variations in the DNA sequences of their patients to pin point which genetic disease they may be carrying and therefore how to treat them. To explain the process very simply, the DNA is extracted from the cell, it is cut into sections of DNA strands and in order to analyse these strands they need to be organised into the DNA sequence they are found as naturally. Hence the technicians, educated to use the super computers, analyse the DNA and in light of the Christmas spirit at the time, tinsel was used to display this. Our tickets for the talk which had been collected earlier, were now used to represent an unorganized sequence, they were then placed into a box representing a ‘super computer’, which began shaking to form a sequence. This would usually take a few days since the computer has to organise between 3 billion pairs of letters in the human genome and 20,000 genes, however we were swiftly given a result as a long chain of tinsel was pulled from the computer, in reality the computer draws a graph of each base in the sequence it has recorded and organised. Now with the full DNA sequence, the bases in the sequence can be compared to other sequences to determine the patients conditions. Hence if they have a rare genetic disorder, their sequence will be compared to their parents or healthy human DNA. If the patient has a cancer caused by DNA mutation, the tumor DNA will be compared to the patients normal DNA.

This extravagantly long process is known as Sanger’s Method and is second nature to the scientists in the lab as a video clip later played exhibited through the types of patients they help and their ongoing research. After the talk were were given a bag of sweets, including jelly beans and strawberry lace to make our own DNA molecule alongside instructions on how to extract our DNA at home! After being dumbfounded by the careful analysis and specific specialties required to test a single patient, never mind an entire family, the talk has left me to truly appreciate how essential these seemingly quiet ‘behind-the-scene’ roles are contributing to daily medical treatment and modern research.