First of all I’m going to tell you to do something that you will hear any healthcare professional tell you to do. If you’ve never had a vaccine against measles or you haven’t had your booster shot yet, get it done soon. Why? Because it’s nasty, highly infectious and though unlikely it may be, it can kill you. I just had mine a few days ago and it didn’t hurt for any of you out there afraid of needles. We are currently going through an epidemic here in the UK and medical experts estimate that 95% vaccination in children is required to prevent the disease from spreading further but we are currently falling short with only 91% having had the jab between 2011 and 2012. The vaccine is currently available in two forms, the MMR vaccine (Measles, Mumps, Rubella) and the MMRV which is exactly the same except for the addition of the Varicella vaccine which is there to prevent chickenpox (caused by the Varicella Zoster Virus). They are both mixtures of live attenuated viruses administered via injection. Attenuated means they have had their virulence (disease-producing ability) reduced but just enough to keep them alive. Yeah I know, lots of terminology! The vaccine is extremely effective, giving 99% immunity against measles. It is recommended that all children between 13 and 15 months old are vaccinated and have a booster dose at 3 and a half to 4 years old. 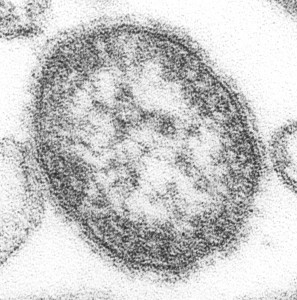 Also known as Rubeola, Morbilli, or English measles, it is caused by a paramyxovirus of the genus Morbillivirus that is spread via respiration (droplet infection). For anyone who is as confused as I was when I first read that, paramyxoviruses are enveloped, single-stranded, negative-sense RNA viruses and morbilliviruses are just a genus of viruses. It is highly infectious with 90% of of unvaccinated people sharing a living space with an infected person catching it. It tends to appear in epidemics (like the one we’re currently in) every 2-3 years and mainly affects children. After an incubation period of 8-15 days, fever and symptoms resembling those of a cold appear. Small red spots with white centres known as Koplik’s spots may also appear inside of the cheeks. Classical symptoms will include the three 3’c; cough, coryza (head cold), and conjunctivitis (red eyes). 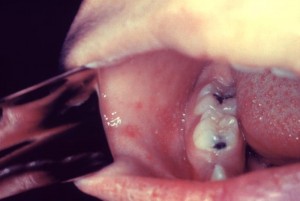 On day 3-5 the infamous itchy rash starts to appear, firstly behind the ears then on the face and elsewhere on the body. The rash is maculopapular (consisting of both macules and papules) and erythematous (redness due to increased blood flow in the skin capillaries) and lasts 3-5 days. In addition to the rash, nausea, vomiting, diarrhoea, and abdominal pain can occur. Complete recovery can take 2-4 weeks and in most cases the symptoms soon subside but patients are susceptible to pneumonia and middle ear infections.

Complications with measles are fairly common and become more severe with age. Severe complications that can arise from measles include encephalitis (1 in 1000 cases) and subacute sclerosing panencephalitis. In the most severe of cases it can prove fatal. It is a common cause of childhood mortality in malnourished children and in immunocompromised patients (e.g. those with AIDS), 30% of them die. Case numbers in England and Wales have risen to 2,016 in 2012, the highest in 18 years with outbreaks in Surrey, Sussex, Merseyside, Liverpool, Heysham, and Morecambe. The most susceptible people to infection are young children and people of my age, teenagers who have not had a second shot and spend a lot of time in close proximity with a lot of people (school and college). 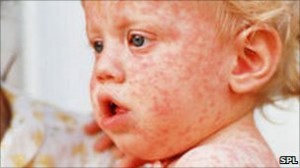 A danger with measles is the belief that measles is a disease of the past, leading to people becoming unaware of how dangerous and severe a disease it can be. This can lead to beliefs that MMR vaccines are unnecessary or that the positives might not outweigh the suspected negatives. The UK along with France, Spain, Italy, and Romania accounted for 87% of the total 7,392 measles cases reported throughout the European Union at the end of November 2012.

I’ll say it again, if you haven’t had a booster shot, Get one.