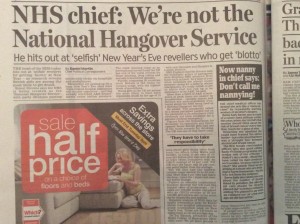 As new year is almost upon us many people will be out tonight enjoying themselves and celebrating the ending of this year and the begining of the next.

It is however a very frustrating time or the people working in the casualty units as they prepare to look after those who have had too much to drink. This will put stain on both the hospitals and the ambulance services to try and keep everyone safe and well. It is expected that drink related hospital admissions will double for tonight and tomorrow. The oust likley of groups to get drunk being British girls, this comes after a survey that girls n the UK are most likely to have been drunk by the age of 15. More than a third of hospital admissions at peak times are caused by drunkeness. Which is adding extra pressure to a already straining health service.

Annother worry tonight will be the use of drugs that has come familiar with parties so is sure to feature and have an impact tonight. A study said that Britian is the worst for cocaine usage with more tha 4 per cent of 15-34 year olds having taken it. This figure being more then twice the European adverage Of 1.9 per cent.

And finally the risk of the spreading of sexually transmitted diseases will be high due to alcohol obscuring people’s decision making. With a population already having the highest levels of gonorrhoea 59.7 cases per 100,000 compared with an adverage of 20 per 100,000. Britain was also in the bottom six for chlamydia and syphilis.

All of these are going to put major strain on the NHS tonight and tomorrow which may impact on its ability to treat some more serious cases, as well as being available to them as ambulances may be caught up on passed out party goes.

The main message here is to enjoy yourself but also act in a responsible and safe manner so that everyone is happy. Everyone stay safe and I wish u all a happy new year. 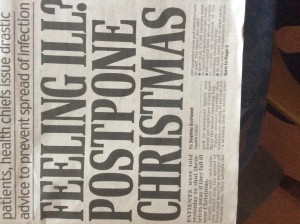 hi guys came across this article in the paper today and thought I’d just comment on what it is about as well as the points highlighted in the article.

In summary it’s telling the public to reframe fro seeing family members over the festive period if you are feeling ill. This is in an attempt to stop the spreading of the norovirus as well as to try and relive the pressure on causality  units that are at there most busiest this time of year. Hospitals are already 95 per cent full with the safe limit being 85 per cent which therefore puts patients at risk of infections or mistakes by worn out staff. Due to this the article recomends not to go to A and E unless they ultimately need to. Instead people are told to phone 111 or see there local pharmacist. The crisis has been blamed on the lack of social care provided from councils that means elderly people become “bed blockers” as they don’t have the facilities at home to be able to be discharged.

This just showcases the problems facing the NHS that are even more apparent  in this busy winter period. It looks As though the pharmacist will have an increasing involvement in the health of citizens. The situation has resulted in many people being turned away from A and E which could be significant in the early prevention of illnesses.

I hope anyone who read this found it informative and if you have any comments or questions feel free to ask. All that’s left for me to say is I hope everyone haves a very merry Christmas.

I have to be honest I have no idea whether this will work or not but here goes nothing. Hi guys I am a A-level student studying Biology, Chemisty, Physics and History on the Isle of Man. I am a keen runner nothing special and enjoy sports, recently been on the medlink intensive course, hope everyone is doing well fingers crossed this works.