I took part in the sure sports leaders course last summer which was one week long and gave me an introduction to sport coaching. During the week I got an introduction of coaching from hockey, rugby, cricket and football. Along with these workshops I also attended a safeguarding and protection of children workshop which was sports coach uk approved. Then finally attended a st. John ambulance essential first aid for all ages.

After completing this week in the summer everyone who attended had to then complete volunteer sports coaching once schools started up again. Everyone kept a log of the amount of hours they have completed with it signed by the appropoite person. I am pleased to announce that after the first term of school I completed the second most number of voluntary hours (27). This got my picture into the local paper of the manx independent showcasing the top three people. 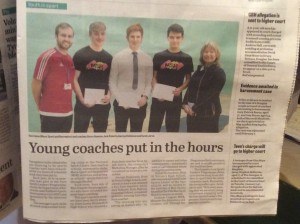 I completed my hours in various differnt ways, I helped out weekly at my local primary school in running there after school sports clubs which would vary in sports from football to handball. I also completed some full days of volenteering at sport schemes that are run on the island which further boosted my hours. During this time I completed a Austism and asperges training course that further enhanced my coaching ability.

Being a sports coach has given me some valuable experiment as well as improving life skills. When coaching people I always work as a team so this helps my teamwork skills, having to coach young children means that l have learnt how to communicate with differnt ages brackets and has helped my communication in general. When helping out with a session I have came prepared with my own session ideas as well as having to adapt sessions that turned out to be going poorly.  Along the way I have coached some children with disabilities including ADHD, autism, speech impairments and learing difficulties. This has given me a wider understanding of the conditions as well as how best to to talk to them and coach them to allow them same opportunitiities as everyone else. Most importantly is to be able to ensure everyone is included and is having  fun. This coaching has enabled me to boost skills that will help in many differnt aspects of life.

Thanks for reading my question is have you completed any coaching and if so please comment on what you have done and attributes gained by the experiences.

I’m the male on the right of the picture if anyone was wondering.