Everyone has sneezed and everyone will continue to sneeze it is one of the most common signs of a person with a cold or flu as well as a way in which diseases can be spread from person to person. 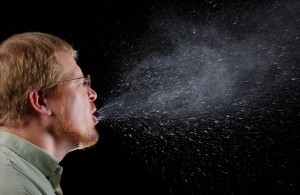 Why do we sneeze

Sneezing is a involuntary act that takes place due to irritation in the nose. This irritation can be caused by different stimulus for different people with the most common being pollen, perfume, smoke and any allergic substance. The nose senses that there is something within so will try go get it out with a large exhalation of air with the hope that the irritant will leave the body or get stuck in the mucus. The nose therefore goes back to its original condition and can function as normal. A sneeze is a reflex reaction that caused a violent reaction in the neck, chest, diaphragm and abdomen which all causes a blast of air leaving the nose. Inevitably saliva and mucus droplets will be forced out of the nose and can then spread the disease to another person.

With new research it has been revealed that the distance that a sneeze can travel has been servery underestimated. Having only thought that it could travel a distance of one meter in actuality a sneeze can travel over 8 meters which means that the chance of catching something off someone else is servery increased. This distance is due to smaller evaporating droplets creating a cloud which then stay suspended for minutes. If on the reciving end of a sneeze then unfortunately there is no way of being able to get away or cover your mouth if a mask hasn’t already been fitted due to the high speeds of the droplets. It is only the person sneezing that can help stop the spreading of the droplets we have all heard the slogan catch it, bin it, kill it. It refers to catching the sneeze in a tissue to then be disposed of and is the most effective way of preventing the spreading of illness. If a tissue is not hand though it is recommended to sneeze into your arm rather than your hands due to the potential spread of disease via door handles, keyboards and any surface that you touch with your hands. There is no way to stop yourself sneezing as it is a reflex response and no saying pineapples doesn’t stop a sneeze.

Thanks for reading if you have any questions or suggestions about me or my blog or anything you would like me to write about then please leave in the comments below. Source used down below.