Parkinson’s disease is a disease that results in the sufferer losing the ability to control their bodies. 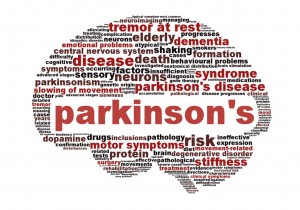 The chemical dopamine is vitally important in regulating the movement of the body by allowing messages to be sent to parts of the brain that co-ordinate movement. Parkinson’s suffers have a reduced level of dopamine that cause the symptoms as they can no longer co-ordinate movement. This reduction is caused by the loss of nerve cells in a part of the brain called the substantia nigra which are responsible for dopamine production. As more and more of theses cells die less and less of the dopamine is made which leads to a disease that gets progressively worse over time. Early signs such as a persons writing getting smaller can in a matter of years lead to involuntary shacking and other symptoms that can make a person reliant on care from others. As with many diseases Parkinson’s affects each person differently which makes treatment difficult in the sense that a medication may help one person but then prove to be detrimental to another patient.

The actual reason for the nerve cells dying is still unknown with the most common suggestion being that many factors have a part to play. These potentially include exercise, genetics, exposure to chemicals, age and other environmental factors. This means that to this day there is no cure for the disease but there are treatments that can enable a sufferer to live a full life. These treatments include physiotherapy, dietary advice, medication and in some cases brain surgery. With many of these focusing on combating the symptoms caused by the disease regarding to movement or any of the wide range of symptoms that can occur making each person’s treatment unique to them. At the start when the disease is mild there will be no need for medication just regular check ups. Research is underway to try and prevent suffers from deteriorating to the point where they need medication.

A new treatment called brain cell therapy is one that is hoped to potentially be able to reverse the affect of Parkinson’s. It is thought that the brain can be coaxed so that other parts of it can take up the role of the nerve cells. This reprogramming of the brain has worked on mice buy giving them some molecules to reprogramme the healthy cells to produce dopamine. It has shown positive affects on the mice treated with the hope that this can be used on humans. Should this work then it could prove to be a cure as the dying cells would no longer be a problem as other cells can take their role. This also rises hope for other conditions that involves brain cells. If they can be reprogrammed to cure Parkinson’s then surly they can be reprogrammed to perform other functions of the brain that may be damaged. This raises hope for millions of people worldwide.

I won’t be writing any blogs for a few weeks due to as exams so will be prioitizing them until they have finished. Will continue once they are over, good luck to anyone else taking exams this season will be active again soon.