The literal translation of anaesthesia is ‘loss of sensation‘. 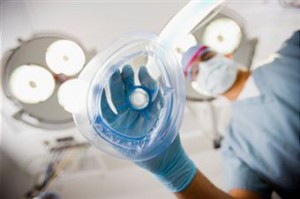 Anaesthetics are the medications used that cause anaesthesia which are used during tests and surgical procedures. Anaesthetics block the signals that pass along your nerves to your brain; after the anaesthetic has worn off, the nerve signals will be able to reach your brain and your feelings will return.

There are a number of different types of anaesthetic and only general anaesthetic makes you unconscious.

There are a number of theories about how general anaesthetics work, however, the precise mechanisms remain unknown.

These side effects do not last very long and can be treated with further medication if necessary.

Anaesthesia has become much safer over the years and advances have meant that serious problems are uncommon.
However, there are always potential complications:

Thankfully, anaesthetics have been developed and so now they are used commonly under safe situations. However, it has not always been like this.
The concept of anaesthesia has been around since they have been performing surgery.

Early anaesthetics such as soporifics (which dull the senses and induce sleep) and narcotics (including opium, mandrake, jimson weed, marijuana, alcohol and belladonna) were all used as substitutes of today’s drugs. Although all of these can provide some pain relief, sedation or amnesia, there were no guarantees.
In mid 1840s, opium and alcohol were the only two substances used regularly as anaesthesia in industrial countries. There were many negative side effects to using these: 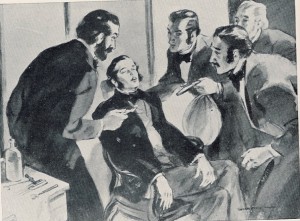 1846– Dr William Morton removed a tumour for the jaw of a patient. He used a sponge soaked in ether and the patient claimed he had no memory of the surgery or any pain. 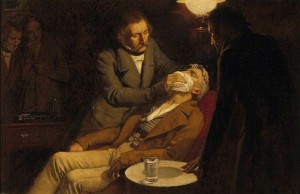 Chloroform was first used as an anaesthetic in the mid 1840s by Dr James Simpson. It is highly toxic and so ether was used instead in the early 1900s.
Using a sponge made it hard to control the dosage and therefore, nitrous oxide is now used as an inhalable gas. Anaesthesiologists administer the drugs via machines that measure the specific amount necessary for each individual patient.

Because the drugs interfere with breathing, patients are often intubated- a plastic/ rubber tube is inserted in the trachea to keep the airway open- and then, during surgery, the patient is kept on a mechanical ventilator. 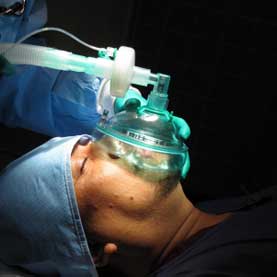