This is a serious mental disorder in which a person pretends to be sick or make themselves sick or injured as they have a deep need for attention. They may make up symptoms, push for risky operations or rig laboratory test results in order to gain sympathy or concern People with Munchausen syndrome go to great lengths to avoid discovery so it is very hard to determine whether these people are suffering from a severe mental illness. This disorder is different to that of hypochondria who truly believe they are sick, because people with Munchausen’s want to be ill.

Some symptoms may include:

People with Munchausen syndrome may be well aware of the consequences of the self-harm they seek but are unable to control their compulsive behaviour and are unlikely to seek help. Usually, people with this disorder will go to great lengths in order to be seen as sick as they have such deep emotional needs. It is common that they have other mental disorders as well. The cause of this illness is unknown, however it is possible that people with this disorder may have experienced a serious illness when they were young, or may have been emotionally or physically abused.

Munchausen by proxy syndrome (MBPS) is different in that someone makes another person ill in order to win sympathy. This usually involves a parent causing or fabricating symptoms in a child. Sometimes, after deliberately misleading others (medical professionals), they may go as far as to actually harm the child through poisoning, medication or suffocation. In 85% of cases, it is the mother who is responsible. Some experts say that it is the attention gained from the ‘illnesses’ of the child that drives them to do such things, but it is also the satisfaction in deceiving others that they consider to be more important than themselves. In some cases of MBPS, the perpetrators were themselves abused as children and they may have come from families in which being sick was seen as a way to get love. There have been a number of serious cases in which a child or children have died as a result of Munchausen by proxy, one being the story of Marybeth Tinning.

Marybeth Tinning suffered from acute Munchausen by proxy and smothered her 3 month old baby in 1985. She is also suspected of murdering her other eight children, all of whom died of suspicious causes. She is currently serving the 20 year sentence of the murder of her daughter. Some of the cases where her children supposedly died of SIDS (Sudden Infant Death Syndrome) have now been seen as suspicious as where she claimed they turned blue after their deaths; it is now known that a child who is a victim of SIDS would look normal after they had died. If the baby was blue, Dr Michael Baden suspected the child died of homicidal asphyxia (smothered to death). Marybeth Tinning seemed to enjoy the attention she received at her children’s’ funerals and this may have caused the deep need for more attention. 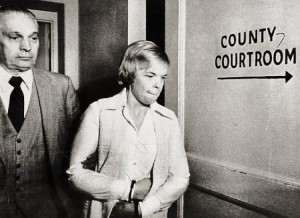 More of her story can be found here: