If you’ve ever suffered from sinusitis, you’ll know it can cause anything from a runny nose to rotten headaches and painful facial tenderness. Sinus disease can affect horses, too, with varying degrees of severity. Some cope well, whereas in others in can cause considerable discomfort.

The disease is poorly understood, yet it has significant consequences for welfare. It’s 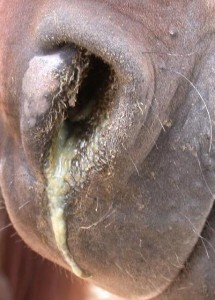 easy to imagine than an affected horse could feel uncomfortable when tacked up and ridden, or experience pain when he puts his head down to graze. Sinus disease has been suggested as a possible reason for headshaking, poor performance and behavioural changes. This makes prompt diagnosis and effective treatment all the more important. But why does sinus disease develop – and how should we tackle the condition if it takes hold?

If a horse’s skull were made of solid bone, it would be too heavy to lift off the ground. Instead, several large, air-filled cavities – collectively called the Para nasal sinuses – make the head a more manageable weight so the horse can move at speed. These cavities are lined with mucous membranes that continually secrete mucus; this clear discharge drains naturally into the nasal cavity through small openings. When sinuses become inflamed, however, the normal secretions become thicker and the drainage system starts to block up. The discharge then becomes infected and pus collects in the sinuses, leading to sinusitis and a horse with a sore head.

In an attempt to better understand sinusitis disease, vets from the Edinburgh and Glasgow veterinary schools last year published one of the largest studies to date. Over a 12-year period, they reviewed 200 cases of equine sinusitis referred to the equine hospital at the University of Edinburgh. These were not straightforward and easily treated cases but more complex problems that were therefore more likely to require surgery. Tackling the different types of sinus disease has historically been fraught with difficultly, with many cases requiring prolonged or multiple treatments. 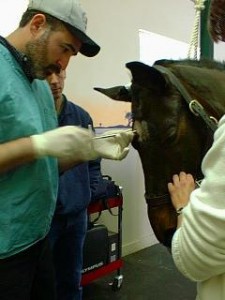 But the study revealed that the long-term success rates for treating the majority of these disorders have improved markedly over the past decade. Researchers found that 87% of cases had complete and long-term remission of all symptoms. A further 6% experienced partial remission – proof that treatment methods for equine sinus disease are now more effective.

Primary sinusitis is the most common of all the disease variations. Its exact cause remains unknown, but it is thought that a viral infection or a bacterial disease such as strangles can damage the lining of the sinuses and interfere with the normal clearance of mucus. This was the most common of the case studies in the Scottish veterinary school survey. Dental disease is the most common cause, affecting almost a quarter of cases in the study. Because the tooth roots extend into the maxillary (upper jaw) sinus, an infected or damaged tooth can also compromise the sinus, the resulting sinusitis can drag on for months, unless the affected tooth is removed.

Sinus cysts were responsible for 13% of the cases studied, followed by trauma from an injury to the head. Tumours, which accounted for 5% of cases reviewed, usually have the worst outcome, as some are inoperable. The two most unusual causes are fungal infections of the sinuses and haemorrhagic polyps, otherwise known as progressive ethmoid haematoma.

With multiple cases, each with a different prognosis it is important to establish exactly 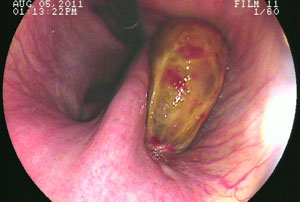 what is wrong. An endoscope is a vital tool for confirming that the discharge comes from the sinuses. Sinoscopy, where an endoscope is used to examine inside the sinuses, is even more effective, a tiny hole, known as a trephine, is drilled through the bone of the skull overlying the sinus so the endoscope can be inserted. This can be done in the conscious horses with the aid of local anaesthetic and is tolerated surprisingly well.

Sinoscopy is only an option if the sinuses are not already filled with mucous. Otherwise, they’ll need to be emptied first by lavage (flushing) or suction. An X-ray is useful even when there is fluid within the sinuses. It will reveal dental disease and soft tissue masses such as cysts or tumours. A bone scan may be necessary, however, to differentiate between dental and primary sinusitis.

Treatments will vary depending on the cause. Around 60% of human bacterial sinusitis cases resolve spontaneously without antibiotics. It is likely that many acute cases of equine primary sinusitis will also need no medication. But the longer the condition persists, the more serious the problem becomes.

Mucolytics, which dissolve thick mucus and old-fashioned inhalations, are still sometimes used to help shift muck and pus and restore the normal drainage mechanisms. Light exercise helps encourage the sinuses to clear. If initial treatment fails to clear the nasal discharge a more radical nasal treatment is sometimes required. Flushing the sinuses several times a day with large volumes of fluid is commonly performed via a tube placed in the sinus.

In chronic cases, more invasive and surgical techniques may be necessary to remove solidified discharge. The vet will usually create a bone flap in the skill to gain better access to the affected sinus. Enlarged drainage holes are sometimes opened up surgically, too, which works well in most cases with surprisingly little scarring.

In the future, more widespread use of advanced imaging techniques such as CT and MRI may further enhance sinus examination and allow more focused early management. It’s worth contacting your vet if a runny nose remains present for any length of time, especially if the discharge is just from one nostril.

One thought on “Unblocking the pipes”