We all know that the cause of laminitis in the vast majority of cases is an underlying hormonal problem in the endocrine system. The two endocrine problems that leave a horse susceptible to laminitis are equine metabolic syndrome and Cushing’s disease. But which would you associate with Cushing’s disease – the elderly pony with the thick curly coat, or the international grand prix dressage horse in full training?

Australian dressage rider Brett Parbery knows to his cost that Cushing’s is not restricted to the equine OAP – he lost his Olympic hopeful Victory Salute to the disease in late 2011. He was only made aware of the presence of Cushing’s once the warm blood gelding developed severe and incurable laminitis. With recent research indicating the Cushing’s 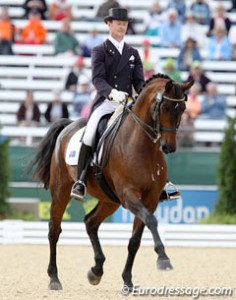 disease can affect much younger horses than previously though, it’s important to be aware of its deadly potential and how it can affect your horse.

Cushing’s; what is it?

Cushing’s disease is called by the abnormal function of the pars intermedia part of the pituitary gland, which is situated at the base of the horse’s brain. The disease’s acronym – PPID – stands for pituitary pars intermedia dysfunction. In healthy horses, this part of the pituitary gland is under tight control. A horse’s age, however, this control starts to fail, so the gland enlarges and produces abnormal levels of several hormones in the blood stream.

Laminitis is one of the most devastating clinical signs of the disease and has significant consequences for the welfare of the affected horse or pony. Other PPID symptoms include excessive hair growth or abnormal hair growth patterns, such as a delayed shedding of the winter coat, and fatty tissue redistribution throughout the body. You should look out too for increased thirst and urination along with lethargy, sweating and a greater susceptibility to infection.

Exactly how PPID causes laminitis has yet to be clearly established, although researchers have demonstrated that high blood levels of insulin will cause laminitis in horses and ponies. Studies at Liphook Equine Hospital laboratory this year identified that PPID cases often have disproportionately high blood insulin levels in response to eating feeds containing glucose, when compared with healthy horses. It is suspected that high levels of insulin also occur when these horses graze pasture – which leads to an increased risk of laminitis. 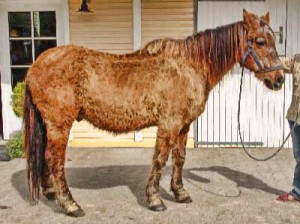 When a horse shows some of the typical PPID symptoms, a vet may be able to make a presumptive diagnosis simply by discussing the horse’s history and performing a clinical examination. It is suspected, however, that PPID may result in laminitis well before other clinical signs are apparent. An additional blood test is often used to reach a definite diagnosis.

Adrenocorticotrophic hormone (ACTH) is one of several hormones produced in increased amounts from the abnormal pituitary gland in PPID- affected horses and ponies. We can measure ATCH levels in a simple blood test and a positive diagnosis is made when these rise above a certain point.

A study by Victoria Copas and Andy Durham last year at Liphook revealed that ACTH secretion can vary from month to month. There are higher levels in non-affected horses during the months of August, September and October. This means we use higher cut-offs for diagnosing PPID from August to October compared with November to July. In the case of a borderline result, vets may consider dynamic tests to confirm a diagnosis. The most common of these is the TRH stimulation test, which triggers the release of especially high levels of ACTH from the pituitary gland in PPID cases.

Since PPID is caused by age-related nerve degeneration, it follows that as a horse gets older the likelihood of a positive diagnosis increases. Originally, researchers though that the disease only affected geriatric horses. Until recently, there were few reports of PPID in horses under 10 years old and it was debatable whether to bother testing horses in this age group. The latest research has altered this point of view. Post-mortem examination of horse in the under-10 age bracket has revealed that some do indeed have PPID. As simple diagnostic tests have become available, younger horses with the most subtle symptoms have been tested and confirmed as positive. Testing for all laminitis cases fir PPID should therefore be considered – no matter what the horse’s age.

We know that many PPID cases are at risk from laminitis. This risk is persistent if the 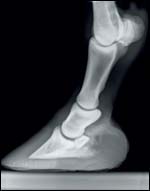 disease is left uncontrolled, so the treatment is aimed at reducing both the chances of laminitis and the severity of the other associated clinical signs. The only medication licensed for the treatment of PPID in the UK is pergolide mesylate, otherwise known as Prascend. Pergolide inhibits the abnormal development of the pituitary gland, which may stop further enlargement of the abnormal tissue present and reduces the hormone levels that are subsequently produced.

Pergolide is considered a safe drug. The most common side effect is a loss of appetite when the treatment is started. This often resolves when pergolide is stopped and then restarted at a lower dose before being increased more gradually. Concerns that the pergolide may cause liver disease have been disproven.

There is some individual variation in the response to pergolide therapy. When obvious PPID signs such as lethargy, excessive hair growth and increased thirst and urination are resolved, we might assume that the disease is under control. But where the clinical signs are less defined, we cannot rely on the outward symptoms to judge if the pergolide dose is correct. In all cases, follow up blood tests will give a good indication of the drug’s efficacy. If the ACTH levels remain high, an increased dose may be necessary.

There is no evidence at this time that any herbal supplements can effectively control PPID. So what is the prognosis for a horse diagnosed with PPID? Unfortunately, the degenerative, age-related nature of the disease means that it can only be controlled rather than reversed. But with early and appropriate treatment, the horse may have many active years ahead.

The most likely cause of death in PPID cases is the development of laminitis, so survival is more likely if the disease is treated effectively and the laminitis risk is reduced. Studies have also revealed that PPID survival rates are lower if high levels of insulin are also present. What’s reassuring for horse owners is that high blood insulin levels can be controlled with diet management changes made under the guidance of the vet.