Osteochondrosis (OCD) is a recognised joint disease in young horses. Several joints may be affected, but big hock joints such as the stifle and hock are commonly involved. Fragments or flakes of cartilage and bone become detached from the underlying bone, which usually causes swelling of the affected joint and often lameness. Keyhole surgery is often required to remove these fragments, or ‘chips’. If discovered early, the outlook is often good.

For a number of years, vets have recognised that there is a genetic 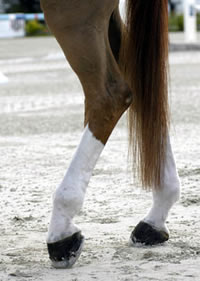 component to OCD development, in that the offspring of some stallions appear to suffer more than others. But this is not a straightforward inherited condition. Other factors such as growth rates, feeding, mineral intake, exercise and some management issues have a big influence.

In Norway, racing trotters are a mixture of either American or French trotter lines. Vets in Oslo examined X-rays from more than 1200 trotter yearlings and looked OCD in hocks and fetlocks, before tracing their pedigrees back to founder lines. This included examination of the breeding of more than 75000 horses.

They wondered whether either the French or American ancestors were more – or less – implicated in the inheritance of OCD and whether the cross-bred population benefitted more from mixed blood. The results showed that just over 16% of the hock joints X-rayed had signs of OCD and, combining all the fetlock joints from the yearlings, about 11% had chips.

Analysis of genetics and breeding revealed that development of hock and OCD appeared to have a greater genetic component than fetlock OCD. But there was no difference between the influences of French or American sires on the disease. The degree of mixing bloodlines made no difference – yearlings with greater diversity of genetic make-up had the same risk of OCD. While this confirms that the cause of the disease has many more factors than simply the breeding of the youngster, the influence of the immediate sire is still considered more important.

How does it affect show jumping performance?

OCD is common in young sport horses, especially warm bloods. After surgery, owners are often left wondering whether the horse will ever reach full potential. To try to shed some light on the subject, in recent years Belgian and Swedish vets have reviewed the performance of 215 stallions presented for admission as sires to the Royal Belgian Sport Horse Society stud book. The stallions had been X-rayed as youngsters and the prevalence of OCD was therefore known, but horses suffering significant lameness had not been admitted to the stud book.

The subsequent show jumping careers of the approved stallions were assessed for both the number of competitions entered and success in the ring. Overall, there was no difference between the stallions that had had OCD in early years and those that had not. But a closer look at the statistics revealed that performance was linked to the particular joint affected by the disease.

There were also individual stallions with OCD that had outstanding careers and statistical risk is not the same as a firm prognosis for an individual horse. The results appear to show, however, that we can be more confident about the outlook for youngsters with OCD of the hocks than those with the disease in fetlocks or stifles.

When horses fail to finish a race because of breathing difficulties, commentators and trainers often use phrases like ‘he’s swallowed his tongue’ or ‘he’s choked up’. This is semantics – horses cannot swallow their tongue, but they do suffer upper airway restrictions caused by a variety of problems, including difficulties with the soft palate and larynx. 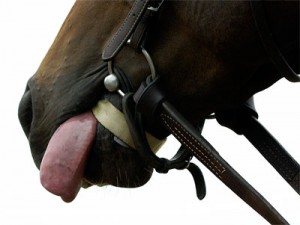 Where this has happened, trainers frequently resort to the use of a tongue-tie – a strap or band of material that literally ties the tongue to the lower jaw beneath the bit. The tie can be made of leather, but it is often a piece of soft, elastic bandage or even a length cut from a pair of ladies nylon tights.

Racecourse vets will check that any tongue-tie used in a race is comfortable and properly applied before the horse races, but does it work? Does is improve breathing during strenuous exercise? Vets at Guelph University, Canada, used ultrasound scanners on 12 racing standardbreds to measure the position and alignment of the thin hyoid bones that support the larynx.

These bones loosely link the larynx to the base of the skull and to the back of the tongue by means muscle, ligament and cartilage. The arrangement is very mobile and moves backwards and forwards as the horse gallops and breathes. Three sets of data were measured while the horses were stationary; with no tack, with a full racing bridle and tack and finally with a tongue-tie applied.

The results showed that adding a tongue-tie alters the position of the hyoid bones and therefore of the larynx and base of the tongue. This does not prove that the airway is open, or that is improved, but it does reveal that the tongue-tie in its various guises has a definite effect on the anatomy of the throat.

Rolling before rising – part of the routine?

Animal behaviour scientists in Denmark have been studying the way in which horses get up on their feet after a period spent lying down. We’re all familiar with the tendency for horses to stretch after rising – the scientists suggested that this is a sign that horses are relaxed and not stressed by their environment. 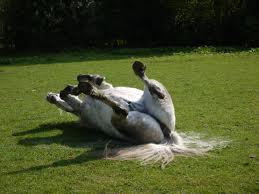 This pre-rising roll was fairly consistent. It made no difference whether the horses were stabled or in a paddock, but the stabled horses tended to be more careful and to roll on their side. Researchers concluded that this behaviour is another indication of a normal, relaxed horse who is happy with his surroundings. What we can learn is that we should expect our horses to roll before they rise 0 and that putting big horses in small stables or tying them in stalls limits their ability to relax in a natural way.

In the wild, horses move a lot and eat almost continuously. But we typically confine our horses, feed them concentrate meals two or three times a day and then wonder why they suffer metabolic problems associated with obesity and a sedentary lifestyle. Australian vets pondered this in relation to the bare summer paddocks of Queensland, where horses and ponies simply hang around the hay feeders. 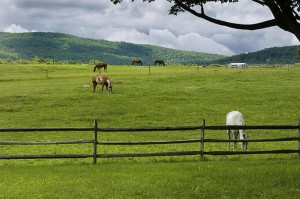 They devised a box-shaped hay feeder, which could open on two opposite sides to give access to the hair. When the motorised door on one side open, the other side closed automatically. Each side open for five minutes before switching over, which forced the horses to swap from side to side to get the hay. The vets fixed a 10m long fence to the feeder, sticking out into the paddock, which the horses had to walk around to access both sides.

Ten horses were shown how the feeder worked before being fitted with GPS tracking collars. In a series of experiments, some horses were kept in a paddock with an open feeder and others in the paddock with the automated version. The amount they moved around was recorded. In a 4hour period, the horses with the motorised feeder walked on average 630m compared to the 117m covered by those with the regular feeder. This proves that if the source of food is moved, horses will move to find it – as they would in the wild.

One thought on “What’s new in the veterinary world”