Dementia is a progressive syndrome that affects about 800,000 people in the UK. The risk of developing dementia increases with age. The condition usually occurs in people over the age of 65.
Dementia is often associated with ongoing deterioration of the brain’s abilities.

People with dementia can become apathetic or uninterested in their usual activities and socialising, have problems controlling their emotions and aspects of their personality may change for the worse. The person may even have hallucinations or make false claims or statements.

As dementia affects a person’s mental abilities, they may find planning and organising difficult so maintaining their independence may also become a problem, therefore usually need help from friends or relatives, including help with decision making.

Other symptoms can include:

Most types of dementia can’t be cured, but if it is detected early there are ways you can slow it down and maintain mental function. Many tests are done to diagnose the disease; some by a GP and others by dementia specialists. Diagnosing is made harder if the symptoms are only mild but dementia is a progressive disease so it will unfortunately become more clear.

The more personal side of it

The first time I was ever made aware that a person had dementia was, not so long ago, when I was volunteering at Rehola, a care home for the elderly. I knew what dementia was and most of the science stuff up there but it’s totally different when you’re with a poor little old lady talking about how much she wants to see her family.

As soon as I walked in, an elderly woman started talking to me and I was happy about it but then got confused- she was saying that she’s glad to see me again but we’d never met. I felt a bit strange and awkward at first so simply I followed the textbook protocol of smiling and nodding along as the conversation drifted but I felt very fake. It was either that or cry so… y’know. I made a not to myself- You’re gonna be a doctor so grow a pair.

The nurse told me to loosen up! Me, loosen up! I’m the loosest person you’ll ever meet… OK not really but I am normally quite chilled. I did as I was told and soon enough I was helping them complete puzzles and I even ended up teaching one lovely old lady how to play Connect 4! She looked really happy and that made me so happy!! I left there feeling as though I had actually been useful!

That’s the kind of thing I want to be able to do as a doctor! No, not just play games, but actually help someone’s mind as well as their body. If playing games with someone can make them feel better, just imagine what the skills of a doctor can do; dude, we could discover the issue before it got worse, less people would have to suffer! Dementia sucks for the person and for the family too and there isn’t much we can do about it after it gets to a certain point but we can do so much before. Maybe we’ll just slow it down but at least that poor elderly person, who has been through this chores of life, can be with their family for longer. That little old lady I mentioned would have been able to see her grandson more often. The other old lady could have laughed more. The angry old man wouldn’t have felt so sad because he when realised that his temper hurts others because there is more that can be done about it. The old lady who was sat on the sofa wouldn’t have been crying because of something that she thinks happened but didn’t. You get my point.

Do you agree? Yay or Nay.

May God bless you all,

The question we’ll all get asked a lot throughout our entire medical career is “Why do you want to be a doctor?” (Or vet or nurse and what-not.)

I want to be a doctor because I think it’s the most wonderful thing that you can do with your life. Well, other than being the Pope.
To cut a long story short, I was born in Guinea-Bissau, W.Africa. It was… bad, to say the least. Everyone seemed to be sick all of the time and I never understood why! I wanted to help them but I couldn’t. I moved to Portugal and started understand things a tiny but more when finally started going to school. You have no idea how happy I was to go to school! But that’s a tale for another day.
Anyway… I had rarely seen any doctors in Guinea-Bissau, all knew was that it was very hard and expensive to see them but in Portugal they seemed to be everywhere; at school, on the box of colours known as a television and more importantly, they were in hospitals. All I knew was that they were awesome!
Then off we went to England! To be honest I thought we were going to America but thanks to the lack of  the accents I’d heard in movies, I figured that it wasn’t America whilst we were on the plane. I’ve learnt of the science behind medicine here and dude, I love science so much! Medicine is an ever changing thing, new developments are constantly being made. Any good doctor will keep up and I am a certified learn-a-holic so I will fit right in.

During my years in late secondary education, volunteering and simply living, I’ve been able to re-evaluate whether I really do want to be a doctor; am I willing to put in that much work? People have always been telling me that it’s hard to become a doctor, but I didn’t understand why at first.
“How hard can it be? I mean, all you do is walk around with a stethoscope around your neck smiling looking pretty! The only things you need is to be good crazy at maths and have a strong stomach because it could get… gross.” That would have been 7 year old Diana’s answer, but 16 year old Diana says “I know that it’s hard. I know I’ll be staying up until 3 am like tonight, but it’s totally worth it because I will have made someone’s life better. Sometimes on a big scale like literally saving their life in A&E or on a “little” scale by advising them to drink more water in a 10 minute appointment. At the end of my life I will be able to stand before God and say ‘You gave me a talent and look at what I have done with it. I was no Pope but this was still pretty cool right?'”
I put ” around little because I don’t think that there is such a thing as a little thing. The little things tend to end up making the biggest difference.

If this was all you knew about me, would you consider offering me a place at medical school? 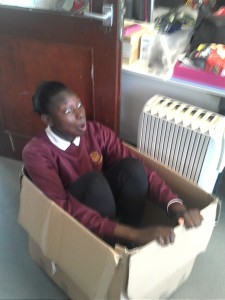 Thank you for reading!! Leave a comment if you have any. Don’t keep them all to yourselves! 😀