Hi everyone! I would like to apologise for the lack of pieces I’ve written recently as it has been a very busy past couple of weeks!

To continue with my review over last year’s most influential medical breakthroughs, I am going to talk about the most extensive face transplant to date, although I will also comment on various ethical issues and risks associated with this procedure. This topic interests me greatly as although surgery was being performed before 2015, last year saw the most advanced surgery to fully recover a firefighters face to date!

I recently gave a small presentation upon the advancement of facial surgery and thus, face transplants to my fellow classmates, in my school’s Enrichment programme where I chose the Biomedicine option, which further shows my through interest upon the topic!

Background knowledge and some facts

Benefits and risks of the procedure

The world’s most extensive face transplant 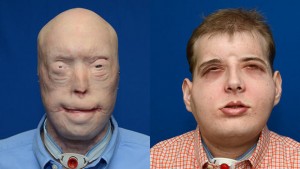 Volunteer firefighter Patrick Hardison was badly burnt in a house fire after he attempted to save a women from the blaze. The fireman faced severe third-degree burns and was visually unrecognisable from whom he used to be, where he lost his ears, his eyebrows and all of the hair from his head.

Dr Eduardo Rodriguez, whom specialises in microsurgery and plastic surgery, transplanted donated tissue which included the entire scalp, forehead, face, eyelids and ears alongside some underlying nerves, muscles and blood vessels onto Hardison in the procedure. Moreover, in order to ensure that the facial features would have a better scaffold to hold on to, and thus, could be held in the correct anatomical place, Rodriguez also transplanted various pieces of the facial skeleton such as the tip of the chin, parts of the cheekbones and the bridge of the nose. The donated upper and lower eyelids were attached to the patient and the inner linings of the nose and mouth were stitched into place, to complete the transplant.

It was immediately evident that the surgery was a success. Hardison’s hair on his scalp, alongside his facial hair, began to instantly grow back, whilst it was evident from the rosy cheeks of the patient that his blood supply had been restored. Hardison was sitting upwards in his chair within a week! Of course, he will have to continue to take immunosuppressants for the entirety of his life, but the procedure, and the anti-rejection medication is surely worth it!