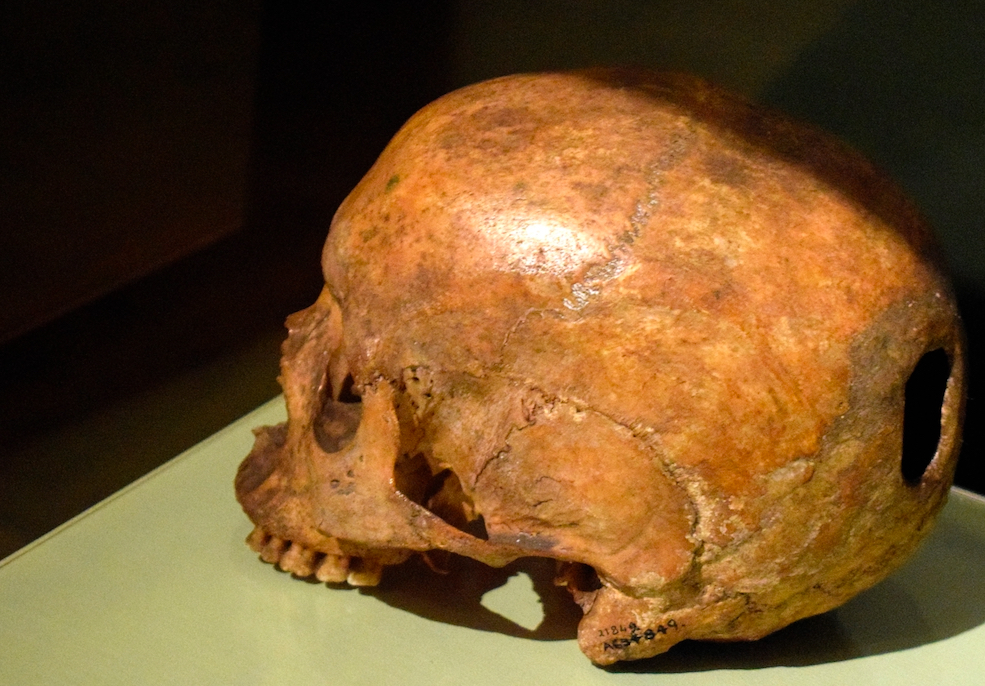 ‘Making a Burr Hole’ is just another way of saying trepanning. What is trepanning? Basically, it’s drilling a hole in the skull and is one of the oldest surgical procedures which has archaeological evidence.

I have recently been to London, and during my trip spent an afternoon in the Science Museum, which I would recommend to any science lover, prospective medic, history buff and it’s great for kids. During my visit, I visited the ‘Journeys Through Medicine’ exhibition which was super interesting, and sparked my interest in a lot of areas to do with medicine and the history of it all. It’s amazing to see how ideas and practices have changed over time, and this is just one such area that I’d like to talk about.

So, back to trepanning. It dates all the way back to prehistory, with evidence to say it was being used as far back as 6,500 BC. And the motivation? Medicine! Surely you’d assume that such a method at a time before even writing had been invented would never actually help and I’m sure it didn’t, yet people back then clearly believed it did because trepanning was used right up until Renaissance time.

During Prehistory, it may have been used to remove evil spirits which were believed to be causing pain, for example headaches or cranial injuries. However, given the lack of hard evidence about the purpose, much of it is up to speculation and some historians have found evidence to suggest that trepanning was used as part of a ritual, so perhaps not related to medicine.

What is really interesting is that with many of the trepanned skulls found in archaeological digs, the bone showed signs of healing which proves the ‘patient’ survived the procedure which says something about the prehistoric people, right?

Trepanning continued through the Ancient period with evidence of the scrapings of the skull being used to make potions in Ancient Egypt, and mentions of trepanning from Hippocrates (Greek) during which time the instrument used was similar to the modern trephine. Trepanning is also seen during Ancient Roman times with Galen specifying the risks associated with trepanning,

“If pressed too heavily on the brain, the effect is to render the person senseless as well as incapable of all voluntary motion”.

Over time we see the method become slightly more refined. For example during the Ancient Roman period, due to the frequency of war as Romans conquered more lands, army doctors gained lots of practice on wounded soldiers in basic first aid and surgery, leading to improvement in technique. What’s more, during the Ancient era the focus of trepanning began to shift towards dealing with trauma as opposed to superstitious beliefs.

However during the Medieval period, there were few developments and even some regression so typically a medieval surgeon would carry out trephining on an epileptic patient for similar reasons as they did during Prehistoric times.

Now, I know I said a long time ago but in fact trepanning is still used in the modern day. For example, trepanation is used in some modern eye surgeries like in a corneal transplant. It is also used in intercranial pressure monitoring and in surgery to treat subdural and epidural haematomas (blood clot) in which a craniotomy or burr hole is made to remove the blood. See the connection?

Thousands of years, and trepanning is still around in one form or another. That’s a lot of history, huh?

Thank you for reading, remember to rate and share!