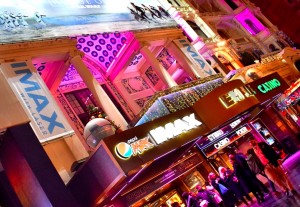 Ever wondered why popcorn pops? Or how a little kernel of corn becomes a tasty snack with just a little bit of heat? Well, whether you have or not I am about to explain the science behind popcorn!

First, how does the kernel become popcorn? The kernel is made up of three parts; the pericarp, germ and endosperm. The pericarp is the outer shell surrounding the kernel which is the key to making it pop, and the endosperm contains some trapped water-as well as starch granules which serve as food  for the germ when it sprouts. 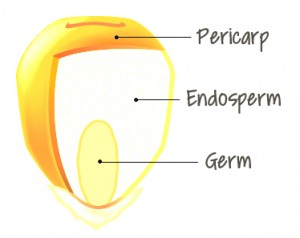 When heated to above 180°C this trapped water expands into steam, building up pressure inside the pericarp. This steam transforms the soft starch grains in the endosperm into gelatinous material, making it softer and more pliable. When the pressure builds up to above 930 kPa, the pericarp ruptures thus releasing the steam and gelatinous starch (basically turning the kernel inside-out) that solidifies when cooled.

So that’s what’s happening in the microwave, but when does the familiar popping sound occur? A study carried out by two French physicists shows the sound is caused by the release of the water vapour. The sudden change in pressure when the steam escapes causes the cavities in the kernel to vibrate and produce that ‘pop’ sound. The researchers also found out why popcorn flies about whilst being cooked, and it’s not actually due to the pop sound. From the ruptured pericarp, a ‘leg’ shaped structure made of starch forms which is compressed under the heat, and then propelled into the air by the ‘leg’ as it expands. The shape of this jump actually mirrors the movement of a gymnast doing a somersault!

Popcorn is the only grain in the corn family that pops when heated in this way, but we all know that not every kernel does pop. At the bottom of every bag of popcorn, there’s a handful or less (if you’re lucky) of unpopped popcorn kernels, but why? To start, the optimum percentage of water in kernels for best popping is 14%. Any lower, and the kernels are smaller and fewer will pop. Most popcorn is harvested in the autumn with a moisture level of 16-20% but are then dried out by forced air to reach that optimum level.

Another thing to think about is the structure of the pericarp. In a study comparing 14 different genetic varieties of popcorn they found that best popping kernels had a stronger, more ordered crystalline structure of cellulose (which is what the pericarp is mostly made up of). This is because during heating, the pericarp acts as a pressure cooker that locks the steam inside the kernel until enough pressure builds up for the kernel to rupture and pop. The researchers showed that the stronger crystalline structure tended to maximise moisture retention, leading to a more complete rupture and fewer unpopped kernels. How this information can be used to ensure that we find fewer kernels at the bottom of the bag isn’t clear, but possible techniques include selective breeding of the best kernel varieties or genetic engineering of the corn plant.

Regardless of those few disappointing kernels, popcorn is one of the world’s favourite snacks with some nutritionists calling it a perfect snack food because it is whole grain, a source of fibre and low in fat. It also has more protein that crisps gram for gram and is a great way to stave off hunger cravings as it’s mostly air. So treat yourself with this fabulous snack and listen out for that snap, crackle and most importantly: pop!