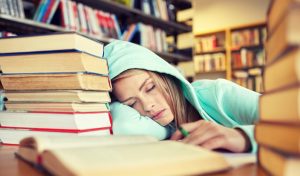 Okay, I know it’s a longer-than-normal title but that’s because it was also the title to the EPQ I carried out last year. For those of you that are unfamiliar with the EPQ, it stands for ‘Extended Qualification Project’ and is essentially a research project about anything you choose. At the end, you either make a product or write an essay; guess which I did? I wrote an essay debating whether or not high school start times should be changed or not, and found the topic so interesting that I thought I’d share a condensed version with you readers!

First things first: are teenagers actually sleep deprived? Constant tiredness is a stereotypical feature attributed to teenagers but are they really losing out on sleep or is it just every day complaining? The recommended amount of sleep for a teenager is about 9.25 hours, but the average that teenagers actually get is around 7 hours per night. This means that they are indeed sleep deprived, so much so that British children are rated to be the 6th most sleep deprived worldwide!

Sleep deprivation is very much a public health issue in my eyes, as the effects of it are detrimental to both physical and mental health. Coordination and endurance are hindered by tiredness, as well as skin problems and even metabolic deficits like obesity being linked to it. Mood can be poorly affected too, with higher occurrences of feeling unhappy or depressed. Outward behaviour can also change from being sleep deprived, with aggressiveness and irritability being seen in subjects lacking in sleep. This can harm relationships between teens and their friends and family. This, coupled with the increased feelings of sadness can lead to incidences of depression. Inordinate sleepiness also makes it difficult to concentrate and stay alert, as I’m sure any teenager you asked could testify to, making it hard to maximise learning at school.

But why are young people so tired? Well, some of this sleepiness could be explained by the teenage circadian rhythm. The circadian rhythm regulates when you fall asleep and wake up, but this sleep timing is all pushed back by 1-3 hours during puberty. More specifically the secretion of the ‘sleepy’ hormone, melatonin, happens and stops happening later into the night and morning. This means that teenagers naturally fall asleep later at night and wake up later in the day than an adult would.

As a result, waking up early enough to get to school by 8:30am clashes with the natural teenage sleep cycle. This impacts not only sleep length, but also quality. Clearly, if an adolescent struggles to fall asleep before 11pm but must wake at 6:30am then they’re not going to get the recommended 9+ hours of sleep needed. But the social jet lag effect created by ignoring your natural body clock results in poorer quality of sleep. Not to mention, the famed weekend lie-in is actually caused by a build-up of ‘sleep debt’ over the week. The body makes an effort to catch up on missed sleep after a week of deficit, but this later waking time on weekends leads to irregular sleep patterns. As I mentioned in my previous post about sleep, lack of routine damages sleep quality so lie-ins aren’t actually good for you.

So… could changing school start times help? Well, researchers at Oxford University predict that by changing high school start times from 8:30am to 10am, GCSE attainment could improve by 10%! This is because of the improved cognitive ability, concentration and attitude that would be seen as teenagers got more, better quality sleep. Thus by starting later, schools would be helping themselves and their students to maximise the time spent at school. Not only that, but the time spent out of school would also be put to better use as increased productivity would mean homework would be completed faster leaving more time for extra-curricular activities.

As I said before, sleep deprivation has very poor effects on young people. Naturally, by allowing teens to get the sleep they need many of these effects would be reversed leading to happier and healthier young people. The actual scale of these improvements can’t be predicted, but given the huge issues that the NHS currently faces with obesity and depression in youths, any improvements would be worth it- or would it?

Changing school start times, as simple as it sounds, would actually be a massive change. Transportation would need to be reorganised, new contracts for teachers would need drawing up, parents would need to change shifts or hire childcare and there would be less time available at the end of the school day. As well as school buses being used, many high school students and staff also use public transport. The shift in timings could affect costs to schools hiring buses and increase congestion, as the later finish would add to rush hour traffic and therefore travel times. This argument is full of faults though. I struggle to understand how the exact same route and the exact same number of buses and drivers would somehow result in higher costings just because it happens 2 hours later in the day. Also, whilst I can see how congestion could be made worse, at least less congestion would be found in the mornings as the rush to school and work would occur in staggered waves.

The later finish time is a common concern amongst young people, as it would leave less time after school for extra-curricular activities, homework and free time. For sports teams relying on outdoor practice, the loss of daylight hours could lead to less practice time and more competition between clubs for use of facilities. Similar competition over facilities could be found in other extra-curricular clubs, as well as less time being available for use of public services like the library. Less time to do homework after school is also a worry, though I have already mentioned the increased productivity that has been found in well-rested subjects meaning less time would actually be required to carry out the same amount of work.

Opposition from teachers would inevitably arise if school start times changed, for one thing because the later finish time added to the work many teachers do after school would result in very late finishes and isolation from their families as schedules clash. However, because adults do not need to wake up as late as adolescents do, teachers could easily adapt to the new school timings by moving all their extra work to the morning hours before school began and would still have the evenings to enjoy with their families.

Additionally, with high schools no longer starting and finishing around the same time as primary schools, childcare issues could cause a lot of stress for families. With older siblings no longer available to supervise younger siblings, parents would either need to change their shifts to make sure they’re home or pay for childcare. This would hit lower-income families the hardest, as lower-paid jobs often correspond with a lack of flexible working hours and to pay for childcare would leave behind less disposable income.

Finally, the sleep deprivation found in teenagers cannot be linked solely to their circadian rhythm. As with most things, a multitude of factors can be blamed either partially or wholly for the trend found and in this case the other considerations to think about are behaviour and the homeostatic system. The homeostatic system is yet another biological process that affects our sleep, but this time it affects sleep/wake length. Regardless of the time of day, the homeostatic system causes ‘sleep pressure’ to build up which can only be relieved by sleep. Now in teenagers, this sleep pressure takes longer to build up over the course of the day than it does in younger children which means that the desire to go to sleep kicks in later in teenagers which could explain the late bedtimes.

Another bit of biology for you: the circadian rhythm is controlled by the hypothalamus which detects light and dark signals in the environment and responds by releasing hormones, adjusting body temperature, etcetera to make you fall asleep. The key role that light plays in controlling our sleep timing and our ever-increasing use of technology may be a big contributor to why teenagers struggle to fall asleep at night. The blue-wavelength light emitted by electronic devices mimics daylight, tricking and stimulating the brain into staying awake and not triggering all of those bodily functions which make us feel tired. No doubt if you asked any young person, they could confirm to you that they routinely utilise some kind of electronic device in the 30 minutes before going to bed. And it is this behaviour which could be making it difficult for teenagers to fall asleep at night thus adding to sleep deprivation.

So you see, there is no simple answer to the seemingly simple question. There may be some biological component which fights against adolescents waking up early, but would fixing that fix the whole problem? And is it worth the effort it would require to implement such a huge change? In my opinion, even the smallest improvements are worth it. I know from experience what a huge difference just one extra hour of sleep makes to my mood and to how I receive the rest of my day. Imagine millions of people just that little bit happier, and what might’ve seemed like a small difference at first becomes something a lot bigger and better. As for the other question, realistically I don’t think that to only change school start times would completely fix the issue of sleep deprivation, but it is a start. For the best results, I would say that education on the importance of sleep and good sleep hygiene should be taught in schools alongside the start time changes.

Thank you for reading, remember to rate and share!

2 thoughts on “Should school start times be changed to accommodate the change in circadian rhythm which occurs during adolescence?”