After watching the Netflix docs-series ‘Babies’ I decided that this week I would look at fatherhood, specifically the way that becoming a dad changes a man’s body and brain. Watching this show, I was genuinely surprised by so many of the findings they had surrounding fatherhood. I guess I shouldn’t have been, but in my defence research on fatherhood has only begun pretty recently compared to research on motherhood! Anyway, the point is I know it now and I’m imparting that knowledge to you 🙂

To start, it makes sense to ask: what triggers the paternal changes in dads? A mother’s body has a long time to adapt over the course of her pregnancy, preparing the woman for the nightmare – sorry, ‘dream come true’ – to come. But paternal changes obviously aren’t triggered by the little human growing inside of them. So what is it? Well, some changes may be triggered by exposure to maternal behaviours and hormones prenatally and others are stimulated by the newborn itself via touch, smell or sight. As more maternal changes tend to have happened before the mother even holds her child, that attachment tends to be immediate whereas a father’s attachment can grow at a slower pace. Nevertheless, this difference doesn’t really matter as it isn’t long before both parents are head-over-heels (or at least in my case 😉 ).

There are both hormonal and neuronal changes associated with fatherhood. Hormone-wise we see an increase in oxytocin, oestrogen, prolactin and vasopressin and a decrease in testosterone. Oxytocin and testosterone are the most important ones so I’ll focus on them.

Oxytocin, also coined the ‘love hormone’ or ‘cuddle hormone’, is associated with empathy, social collaboration, care of infants and love so it’s little surprise that this is a biggie when it comes to parenthood. This love hormone increases through physical contact, so the more you do with your baby the more oxytocin is released. That means dads that engage more in the parental role end up having a closer bond with their baby. Seems pretty intuitive, right? You might have noticed it’s a bit of a positive feedback kind of thing i.e: do stuff with baby = oxytocin, oxytocin = want to do stuff with baby.

Now onto testosterone. This might not seem like good news to some, but going from a single man to a married father testosterone levels can decline by about a third. However I’d argue it definitely is for the best because that lower testosterone is associated with fathers being more affectionate and sensitive towards their babies. What’s more, similar to oxytocin testosterone is seen to decrease more the more involved a father is in caring for the baby. That decrease in testosterone is also thought to reduce the drive to find a new mate, encouraging a new father to nest instead.

The brain changes seen in fathers is in many ways the same as those in mothers. Increases in gray matter is seen in parts of the brain dedicated to ‘parental motivation’ including the striatum, amygdala and hypothalamus. This gray matter growth is associated with better multitasking, increased emotional responsiveness and an improved ability to detect a baby’s needs. Basically, brain changes allow both mothers and fathers to better understand a baby’s mental state.

Interestingly, mothers and fathers do differ when it comes to fear. The amygdala is activated more so in mothers that in fathers meaning that mothers worry more about their child. From personal experience I can say that explains a lot. BUT that’s not always the case! Possibly the most interesting thing to come out of ‘Babies’ was the fact that in cases where the father was the primary caregiver, like in a single-parent household or in gay couples, the same activation of the amygdala was seen as in mothers. This suggests committed caregiving is the real brain-changer rather than the biological connection between mother and baby.

All of this is interesting stuff, but is it useful? In the literal sense, maybe. There have been studies considering the link between these paternal changes and postpartum depression in dads although nothing massive has come out of that line of thought yet. I think, for now, the main value in all this research is in helping to shift societal views on parenthood.

It’s long been thought that mothers are naturally better equipped at child rearing, so much so that anthropologist Margaret Mead once said that fathers were “a biological necessity but a social accident” – essential for fertilising an egg but not so useful thereafter. But that’s just not true. Putting all of this research together, it’s becoming clear that dads are biologically just as capable of caring for, raising and nurturing their children as mums are and the differences that are often (but much less nowadays to be fair) seen in parental involvement are more due to social upbringing than any biological predisposition. As Dr Feldman says in ‘Babies’, “fatherhood is biological, it’s as deep as motherhood”. All of this to say… you have no excuse Dad! Biology is telling you you should nurture me by buying me a car! Oh, and Happy Fathers Day xx 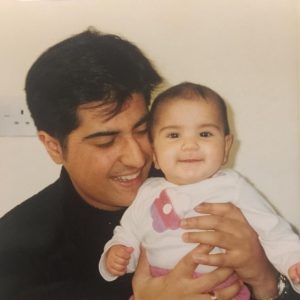