Nut allergies are an area of interest for me, especially as I myself am allergic to hazelnuts. In light of my diagnosis I wanted to do some extensive research into how allergies develop and where they stem for. I thought I would share what I found.

An allergic reaction is triggered by the particular substance (allergen) that you are allergic to. Your body perceives it to be a foreign invader.The allergen then binds to the IgE (Immunoglobin E) antibodies. When this happens, the mast cell breaks open to release inflammatory substances which quickly travels through your body to fight off what it senses as harmful. The histamine affects the body tissue and causes an inflammation. It all begins with exposure. Even if you’ve inhaled an allergen many times before with no trouble, at some point, for some reason, the body flags it as an invader and you are now “sensitized” to the allergen. 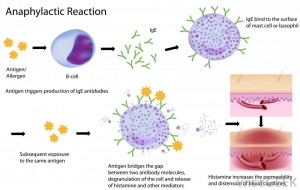 Your risk of developing an allergy starts in your genes. While specific allergies are not inherited, a tendency toward having allergies is. Children with one allergic parent have a 33% chance of developing allergies; with two allergic parents, it’s a 70% chance. I found this particularly interesting as nobody in my family has an allergy to anything (let alone nuts). They say allergies affect around 1 in 5 people but the severity varies significantly (from watery eyes to anaphylactic shock)and can be developed at anytime during life. Although there is a degree of ambiguity in the knowledge of my allergy I seem to have a fairly severe allergy meaning I have to consistently carry precautionary measures in case a reaction is triggered. This includes to EpiPens and strong antihistamine tablets.

Histamine is a chemical the immune system uses to help protect the body’s cells against infection. The histamine causes small blood vessels to expand and the surrounding skin to swell. This is known as inflammation.Histamine is usually a useful substance, but if you’re having an allergic reaction it’s sometimes necessary to block its effects. This is done by antihistamines. Antihistamines work by blocking the receptors in each cell, so histamine can’t activate the receptors and affect the cell.

EpiPen’s contain adrenaline (sometimes called epinephrine) and is given by injection to treat a life-threatening allergic reaction called anaphylactic shock. Anaphylatic shock is a severe, potentially life-threatening allergic reaction. An injection of adrenaline rapidly reverses the symptoms of anaphylaxis by acting on alpha and beta adrenergic receptors in the body. The alpha receptors are found on the walls of blood vessels. When adrenaline stimulates these receptors this causes the blood vessels to narrow, which stops the blood pressure from falling too low. It also redirects blood to vital organs like the heart and brain. The beta receptors are found in the heart and lungs. When adrenaline stimulates these receptors this relaxes and opens the airways, making breathing easier. It also stimulates the heart, making it beat faster and stronger. Adrenaline also relieves itching, hives and swelling. Obviously whenever it is injected an ambulance must be called ASAP so that heart rate can be monitored.

So can allergies be prevented..

Scientists at Kings College say feeding babies with peanuts at least three times a week protects them from developing nut allergies in later life. Having followed hundreds of children for more than 10 years to see if early exposure to nuts could prevent the emergence of potentially lethal allergies, they discovered that introducing nuts regularly in the first year of life was enough to build up a tolerance by the age of six even if the child stopped eating them for 12 months. All the children tested had a family history of peanut allergies, placing them at high risk. Currently the NHS recommends that children at risk should avoid nuts for the first three years of life. But the new study suggests that could do more harm than good. Professor Gideon Lack, Head of Department of Paediatric Allergy, King’s College London said “It clearly demonstrates that the majority of infants did in fact remain protected and that the protection was long-lasting”.

Clearly early exposure could inhibit the number of cases of allergic reactions that since 1996 the number of reported NHS cases has increased by 615%. Perhaps the actions of parents could limit allergies becoming dangerously prevalent..