I read an article last week that shed light upon a specific aspect on the junior doctor debate that was of particular interest for me as it was undoubtedly going to affect me (assuming all goes well – touch wood!).

The Guardian wrote an article last week speaking of how the new junior doctors’ contract was in fact discriminatory towards women. Two presidents of medical royal colleges have said it may force female doctors to QUIT. In a joint statement they said:

“We are very concerned by the language in the government’s own equality analysis of the contract, which warns that features of the new contract ‘impact disproportionately on women’. Recent commitments from government to support women in business are greatly welcome. We view the wording of the equality analysis as incompatible with this approach.”

So here are the details…

Dr Roshana Mehdian, one of the leaders of the junior doctors’ campaign against the contract, criticised the department of health for saying that women should make “informal childcare arrangements” if they are affected by having to work more antisocial hours. She said:

“This is ludicrous in the 21st century when childcare costs are spiralling and access to out-of-hours childcare is limited. This discriminates against women, single parents and working couples. It is a regressive and draconian contract, undoing years of work to improve equality.” 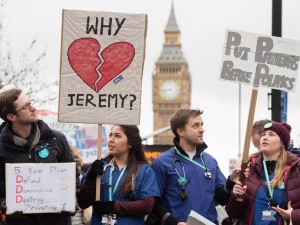 The department of health’s response to these claims follows:

“Our equality analysis shows doctors on the new contract will benefit from a fairer pay model that better rewards those who work the most intense and unsocial hours and will improve patient care across seven days. Part-time trainees will now benefit from the same benefits as those working full time, including the same pay protection on a pro-rata basis.”

As the BMA launch legal action against the new junior doctors’ contract, I personally have a firm foot on the side of the junior doctors. The thought of these prospects is detrimental (for both the patients and the doctors themselves).