Last week I attended a lecture at Newcastle University where 3 pHD students presented their research projects which had won a prestigious competition within their faculty at the university. One of which was presented by a local paramedic called Graham McClelland. His project was strikingly titled ‘When is a stroke not a stroke?’.

The main causes of a stroke are either a blockage within the blood vessels in the brain or from a bleed/weakness of these neurological blood vessels. 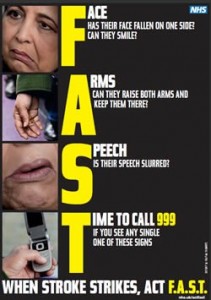 Strokes are currently the 4th largest cause of death in the UK and are the leading cause of neurological disability. 1 in 6 of us will have a stroke before we reach the age of 75. For the successful treatment of a stroke (where the patient is thrombolysed using clot busting drugs) time is of the essence; in 1 minute 2 million brain cells are lost and for that reason a stroke can only be treated using these drugs within 4.5hours of the stroke occurring.

One of the most successful NHS campaigns has been the FAST technique to spot strokes in other individuals. We’ve all seen it advertised on the TV and it is still the method by which a stroke is detected by paramedics and other healthcare professionals. McClelland explained it is a foolproof method; it never fails to spot strokes.

However this method also identifies other underlying diseases, otherwise known as ‘stroke mimics’. These ‘mimics’ possess many of the same symptoms as strokes and for that reason are consistently treated as suspected strokes. According to McClelland’s findings approximately 1 in 5 suspected strokes are actually mimics. Some of these mimics included suffering from migraines, epilepsy, sepsis and hypoglycemia. These ‘false positive’ patients may still need urgent medical review. However, if they are transported to a stroke unit, the extra work could delay care for both the ‘mimic’ patient and other stroke patients and dilute the resources available for stroke care. This is a real issue.

To combat this issue McClelland is seeking the introduction of a similar campaign to the FAST campaign, but this time to spot these stroke mimics.