The Truth about Alcohol. 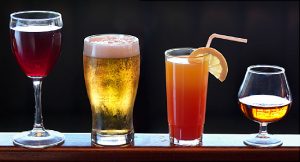 Alcohol can be an mixture of any grain or berry with ethanol and water and sometimes sugar. In the middle ages it was safer to drink weak beer than water due to water born disease that could be killed of in the process of fermentation or boiling.

In British culture, alcohol common so much so that if you don’t drink you are either pregnant if you are a woman or you’ve had a drinking problem the past. There is also the social pressure to be drunk before you go to a club with the goal to be drunk. It sounds strange to ask someone why they aren’t taking mdma. Most people will say that they are t-total (this originates from when people took total abstintes and said it with a stammer).  The appeal of alcohol is being drunk. There is nice drunk i.e. tipsy. or when people use drinking alcohol to cope with their issues.

The  short term effects of alcohol:

There has been some connections between excessive alcohol use and mental health. I think they are usually the result of one another and it is very hard to do the research about this topic due to the lack of people who don’t drink by choice and haven’t been affected by a drinking disorder. Therefore, to be informed is the best way to stay safe when drinking.

Alcohol is known globally as the ‘dirty drug’ due to its effects on all the neurotransmitters acting as a stimulate and a depressant. It is hard to predict how it will affect different people because it seems that there re no limits to how it can operate in all avenues. Also like some other substances this is a drug that can not only harm the individual but it can bring harm to others due to the effects on the individuals behaviour.

Red wine is good for you? In actual fact resveratrol is good for you. This is the magical ingredient in red wine that, in some cell based studies, has been found to reduce the risk of some cancers but you would have to drink it in buckets to get the right amount. Also the toxins in alcohol would kill you before you got a beneficial amount.

In a study it was shown that ‘those who drink a small amount are heathier then people who don’t drink at all.’ People who don’t drink have a higher risk of various health issues then those who have a tiny amount of alcohol and then the risk increases rapidly for those who drink more. This is seen as an anomaly. People who don’t drink may have been forced into having to stop drinking due to illness or problems with alcohol. Furthermore, there are many other factors that contribute to your health risks and alcohol. For example, your family history and class, the most affluent people who have very easy life don’t feel the need to drink lots. On the other hand, those who don’t drink may have had the hardest lives and not be able to have alcohol but also not be able to keep their health at as good a level as the other social classes.

Some people say that you may be more susceptible due to your genetics. Genotypes are used as a proxy to predict this data and when used there is no j shape curve.  There is no perfect study and the best way to prove the results would be to answer the same question in different ways, all with their limitations but anomalies show up in some experiments but not all will have anomalies and some will have no anomalies at all. There is no j shape curve in the risk of lung cancer when looking at those who smoke 50 a day .

This data came out before the alcohol guidelines changed. The only piece of information that has more evidence then others is that a tiny amount of alcohol in women over 60 is beneficial.

In my opinion, as someone who plans on never drinking, alcohol resonates a strange note in my mind. People are drinking the stuff that in other strengths and forms is in hand sanitizer because it is so strong it kills germs but people still drink it.

‘Say why to drugs’ by Dr Suzi Gage (podcast)