Today I started my week on the Aspiring Doctors Programme at Stafford Hospital. 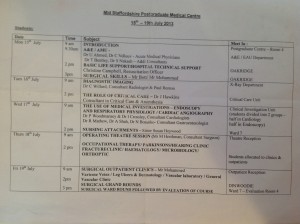 I met up with the six other work experience students in the Postgraduate Centre and we had an introduction to the Programme from a surgeon. Then I went to the Acute Medical Unit (AMU) with four of the other work experience students and we split into two groups to go on ward rounds with the consultants. The first patient we saw had quite severe dementia and she was confused and was attacking the nurses who were cleaning her. When the doctor examined her she appeared quite reluctant to be seen and didn’t really seem to understand what was happening. She had also refused to eat or drink anything and had spat out the medication she’d been given at her care home. The doctor said afterwards that patients with such severe dementia probably wouldn’t be resuscitated if they suffered from a cardiac arrest.

We also saw another elderly patient who started crying when I asked her how long she’d been in hospital. She said she’d been having hallucinations and could see people around her, calling her names. First the doctor asked her some simple questions, which either she couldn’t answer or made her confused and then he examined her movements, which weren’t very good, so he decided to refer her to the mental health ward, and said she was probably developing dementia.

Many of the patients in the AMU ward were elderly (from 85 to 90+) and there were also a lot of patients who were alcoholics, which meant that some were quite violent and difficult to treat. The consultant examined all of the patients before making a list of possible causes (differential diagnosis). Then he arranged for tests such as CT scans to find out the diagnosis so that a plan for treatment could be made. He said that it was usually a very simple test, such as a urine dipstick test, that would diagnose a patient.

Unfortunately, one of the work experience students then fainted, so she was given a bed and her blood pressure was checked. It was very low, so she was taken down to A & E for an echocardiogram.

At the end of the ward round all of the doctors and the head nurse came together to review all of the patients and discuss what needed to be done. It was really interesting to see a typical morning for a doctor in AMU, and to gain an insight into some of the challenges that doctors face; patients who don’t want to go home; patients with dementia who won’t comply because they’re not competent; and violent patients who have problems with drugs or alcohol.

After lunch we had some paediatric basic life support training, where we learnt how to resuscitate babies and young children, by doing mouth-to-mouth resuscitation and compressions on dummies. We also learnt what to do if a child or baby is choking and had a chance to ask a nurse about what it’s like working in paediatrics. 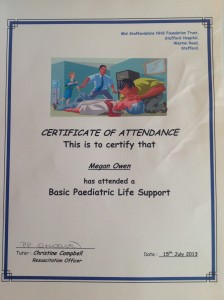 Later, we learnt some surgical skills from a surgeon who taught us how to tie together blood vessels and different ways to stitch up wounds, which I really enjoyed.