I read this article in The Telegraph the other day.

According to David Willetts, the Universities’ Minister, the level of competition among sixth formers for places to study medicine was so high that he was encouraging more people, particularly girls, to apply for other courses like engineering. This is because last year around 4,800 students with straight As at A-level failed to get in to British universities and of those the largest number, around 1,800, were those applying for medicine.

It is thought that there is an increasing interest for medicine because of the high tuition fees and the increasing pressure on students to secure well-paid jobs in the future.

His comments were attacked by head teachers of private schools who warned that ‘the NHS was failing to fund enough places on medical courses despite repeated complaints over a shortage of highly-trained doctors.’

I was one of the lucky ones and am now studying medicine at university, but it was not easy and if you want advice on how to improve your chances of getting a place, click on the link below and have a look at this great new book, Get Into UK Medical School 2015, for sale on Amazon now.

This summer I had a great time in Italy and Portugal, I passed my driving test first time and I was so happy to get A*A*A in my A levels. Now this Saturday I’m going to start medical school! I’m so excited and can’t believe it’s happening at last.

I’ve been very busy for the last few weeks seeing friends from Malawi who are studying over here too, going out with friends from school and getting everything I need for uni. I wish everyone lots of luck with their applications to medical school and I hope that you find this blog useful.

At last all my exams are over and I just have my driving test in a few weeks. Yesterday I went back to the Pearson Vue test centre where I’d taken my UKCAT last summer, for my driving theory test. The driving theory test was easy in comparison, and I quite enjoyed it, but it was weird going back, as I could remember how nervous I was before my UKCAT. Luckily I got into it and it was a great feeling coming out afterwards with my test score, which was better than I’d thought I’d do. I hope everyone that is doing their UKCAT this summer gets the results they want too, and if anyone wants some advice about taking the UKCAT or writing their personal statement, take a look at this book available on Amazon kindle by clicking on the title in bold below.

Get Into UK Medical School 2015 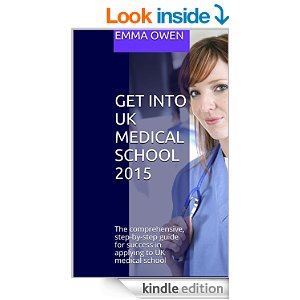