This week, as part of my volunteering at Derriford Hospital, I was given the opportunity to take the case history of an already diagnosed patient. This was a brilliant chance to implement the protocols I had learnt whilst shadowing Dr Lambert. Prior to meeting the patient I was provided with a final run through of all the necessary information I should have acquired. Firstly I was to ask about the presenting complaint, then enquire further as to determine the history of the presenting complaint. Having established this, the past medical history and allergies needed to be established, as well as any regular drugs that have been prescribed. To conclude my investigation, I was to proceed to find out about the patient’s social situation, including factors such as alcohol intake and the extent to which the patient has smoked. 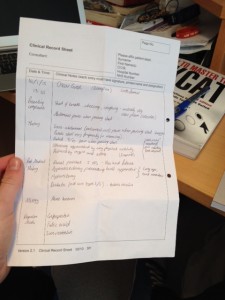 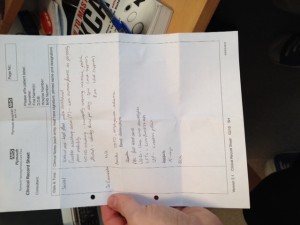 Above are the photos of the notes I was able to take; from these I made an educated guess that emphysema was the likely cause of the described wheezing and coughing of sputum. Upon looking further into what I believed was causing the patient’s presenting complaints, COPD (Chronic Obstructive Pulmonary Disease). To my great surprise the doctor with me confirmed that my suspicions were correct!

The main cause of COPD is smoking. The likelihood of developing COPD increases the more you smoke and the longer you’ve been smoking; the patient I had questioned had in fact been smoking for 40 years. Smoking irritates and inflames the lungs, which results in scarring. Over many years, the inflammation leads to permanent changes in the lung. The walls of the airways thicken and more mucus is produced, this explains the sputum in the patient’s cough. Damage to the delicate walls of the air sacs (elastic fibres in particular) in the lungs causes emphysema and the lungs lose their normal elasticity. When there is high pressure in the lungs during exhalation, the weakened elastic fibres don’t force air out of the lungs. This air is compressed and under high pressure causes the alveoli to burst. This reduces the surface area:volume ratio of the lungs, thus reducing their efficiency as an exchange system. The smaller airways also become scarred and narrowed. These changes cause the symptoms of breathlessness, cough and phlegm associated with COPD.

A chronic cough is usually the first symptom to occur. When it exists for more than three months a year for more than two years, in combination with sputum production and without another explanation, there is by definition chronic bronchitis. This condition can occur before COPD fully develops. The amount of sputum produced can change over hours to days. In some cases the cough may not be present or only occurs occasionally and may not be productive. Some people with COPD attribute the symptoms to a “smoker’s cough”. Sputum may be swallowed or spat out, depending often on social and cultural factors. Vigorous coughing may lead to rib fractures or a brief loss of confidence.

Shortness of breath is often the symptom that bothers people the most. It is commonly described as: “my breathing requires effort,” “I feel out of breath,” or “I can’t get enough air in”. Different terms, however, may be used in different cultures. Typically the shortness of breath is worse on exertion of a prolonged duration and worsens over time. In the advanced stages it occurs during rest and may be always present. It is a source of both anxiety and a poor quality of life in those with COPD. Many people with more advanced COPD breathe through pursed lips and this action can improve shortness of breath in some.

In COPD, it may take longer to breathe out than to breathe in. Chest tightness may occur but is not common and may be caused by another problem. Those with obstructed airflow may have wheezing or decreased sounds with air entry on examination of the chest with a stethoscope. A barrel is a characteristic sign of COPD, but is relatively uncommon.

Advanced COPD leads to high pressure on the lung arteries, which strains the right ventricle. This situation is referred to as cor pulmonale, and leads to symptoms including leg swelling and bulging neck veins. COPD is more common than any other lung disease as a cause of cor pulmonale. Cor pulmonale has become less common since the use of supplemental oxygen.

To conclude, this brief encounter with practising diagnosis has made me realise the enormous room for error; so many diseases present such similar symptoms. Attempting to deduce the fine details of a patient’s case is also very difficult when the patient them-self is both confused and exasperated. This experience has revealed the importance of blood tests, particularly arterial blood-gas tests, when attempting to determine the diagnosis of a lung disease.