Research has been done at the Institute of Neurology in London, which has found that professional football could be linked to a specific injury of the brain, also found more commonly in boxers.

The brains of six professional footballers who have played for an average of 26 years were examined in autopsies. In four of these males, signs of CTE were found; an injury common in boxers but uncommon in the general population. Chronic traumatic encephalopathy (CTE) is a form of dementia which is caused by repeated blows to the head.  There are many symptoms including memory loss, disorientation, parkinsonism and dysarthria.

Repetitive brain trauma also leads to a build up of tau protein. This  slowly kills brain 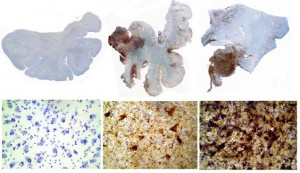 cells leading to brain damage, most commonly Alzheimer’s disease (which was also found in the four brains).

But how does this relate to football? Repeated heading of the ball and other head impacts are thought to have caused the CTE present in the four males which were examined. The Professional Football Association have set to ban children under the age of 10 in America from heading the ball, due to fears of brain damage.

Although the research shows health risks associated with playing football at a high level, there is opposing evidence which shows footballers  have lower risks of cardiovascular disease, and will live longer lives. It is also unlikely that the injuries which come from recreational football will cause long term problems like professional football possibly can. Moreover In addition to the signs of CTE in the four men, the autopsy also showed blood vessel damage (a cause of dementia), meaning that professional football playing was not the only contributing factor to the brain injury.