In our current state of lockdown, people seem to have been digging out their weights from the back of their cupboards and pulling out their bikes from their sheds. In the vast majority of cases, it is simply to kill time, but it comes with the added benefit of building muscle. It is impossible to go through your life without going through this process of muscle growth; but what goes on underneath the skin in this process is often a mystery to most people.

Before I begin on talking about muscle growth, I think that it is important to first understand the anatomy of muscle tissue. There are three types of muscle: Skeletal (voluntary muscles that move the body, arms and legs), smooth (involuntary, found within the walls of internal organs, like stomach, intestine, bladder and blood vessels) and cardiac (the muscle of the heart). The only type of muscle relevant for this article is skeletal muscle. Each individual skeletal muscle cell is surrounded by a sarcolemma (cell membrane), which is structured to receive stimuli. The cell is filled with myofibrils, resulting in the other organelles and nucleus being squashed to the side of the cell. Myofibrils are the contractive units of the cell which consist of protein myofilaments which run longitudinally along the muscle. These filaments come in two types – thick (myosin) bands or thin (actin) bands. The thin (actin) bands are attached to a Z-line of a protein called titin, which anchors the other bands in position. The distance between two Z-lines is called the sarcomere, which acts as the smallest contractile unit. Between each of the muscle fibres is a liquid called the sarcoplasm, which is a glycogen store. When a stimuli occurs that results in muscle contraction, Ca2+ is released which results in the troponin-tropomyosin complex removing its block from actin, so the myosin heads can bind to the active sights of actin, and therefore swivel (the working stroke), pulling the Z-lines closer together and shortening the sarcomeres and hence the entire muscle. The process then reverses for the relaxation of the muscle. 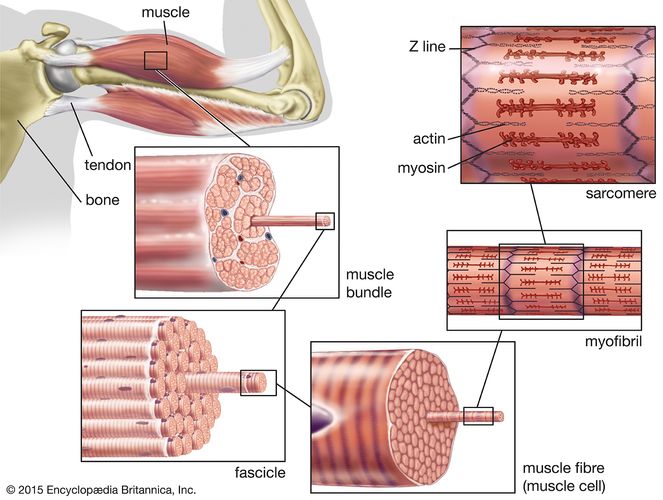 There are two types of hypertrophy (muscle growth): myofibrillar and sarcoplasmic. But it is important to understand that when you first begin to lift weights and complete strength building workouts little hypertrophy occurs. Instead neural adaptation occurs, which is a vital part of strength. It refers to the ability of the nervous system to appropriately activate the muscles. Strength training may cause adaptive changes within the nervous system that allow a trainee to more fully activate prime movers in specific movements and to better coordinate the activation of all relevant muscles, thereby effecting a greater net force in the intended direction of movement. After appropriate neural adaptation has occurred, hypertrophy can begin to take over, with neural adaptation development continuing in the background.

Myofibrillar hypertrophy is what most people are aware of when people talk about muscles becoming damaged (damage could be in just a few macromolecules of tissue or result in large tears in the sarcolemma, basal lamina, and supportive connective tissue) which occurs when weights are lifted that are much heavier than what the person is comfortable with. These microtears in the myofibrils, when being repaired, increase the density of these myofibrils which increase the strength of the muscle. They are repaired by causing mechano-chemically transduced molecular and cellular responses in a cascade of events. Myosatellite cells, which are small multipotent cells and are precursors to skeletal muscle cells, are responsible for the reparation of muscle tissue, through the process of cell differentiation. If sufficient mechanical stimulus is imposed on skeletal muscle, these myogenic stem cells become aroused and fuse to existing cells to create new myofibers. They become aroused by the initial response which is likened to the acute inflammatory response to infection. Once damage is perceived by the body, neutrophils migrate to the area of microtrauma and agents are then released by damaged fibres that attract macrophages and lymphocytes. Macrophages remove cellular debris to help maintain the fibre’s ultrastructure and produce cytokines that activate myoblasts, macrophages and lymphocytes. This is believed to lead to the release of various growth factors that regulate satellite cell proliferation and differentiation. The satellite cells therefore contribute to muscle hypertrophy in several ways: they donate extra nuclei to muscle fibres to synthesise more actin and myosin; and they co-express various myogenic regulatory factors that aid in muscle repair, regeneration, and growth.

But, the vital part of myofibrillar hypertrophy lies in hormones and cytokines which are secreted by muscle fibres to orchestrate skeletal growth. The  three major hormones in this process are insulin-like growth factor (insulin-like growth factor receptors are found in activated satellite cells and adult myofibers and it is released during exercise acting as a signalling pathway to satellite cells), testosterone (which interacts with receptors on neurons and thereby increase the amount of neurotransmitters released, regenerate nerves, and increase cell body size), and growth hormone (which stimulates the incorporation of amino acids to make proteins). Cytokines act as mediators to the entire response of the muscle, carrying out many tasks including: the regulation of swelling; binding to receptors to activate a series of target cells involved in cell proliferation and differentiation; and maintaining metabolic homeostasis of lipids and proteins along with many more.

Sarcoplasmic hypertrophy occurs as a result of working your muscles to fatigue. This is because the sarcoplasm is a fluid that acts as a glycogen storage and therefore fuels the muscle through the workout. When a workout is completed to fatigue, the volume of sarcoplasm will increase to maintain contraction for a longer period in the next workout. This is because metabolic stress manifests as a result of exercise that relies on anaerobic glycolysis for ATP production, which results in the subsequent build-up of metabolites such as lactate, hydrogen ion, inorganic phosphate, creatine, and others. This leads to larger muscles but not necessarily stronger muscles. Exercise regimes that cause an increased glycogen storage capacity also have the potential to augment cell swelling. Given that glycogen attracts three grams of water for every gram of glycogen, this may reflect an increased capacity for protein synthesis as cell swelling is known to stimulate anabolic processes, including an increase in protein synthesis. Furthermore, it also has been hypothesized that a greater acidic environment promoted by glycolytic training may lead to increased fibre degradation and greater stimulation of sympathetic nerve activity, thereby mediating an increased adaptive hypertrophic response. 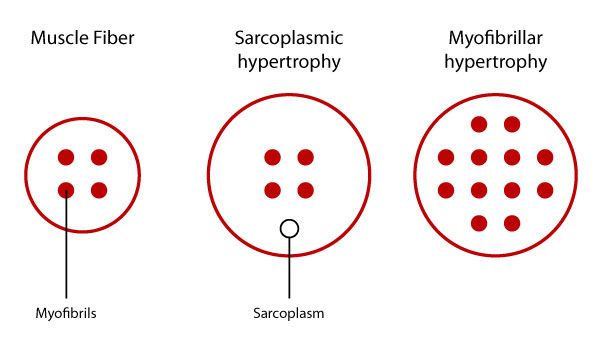 The implications that this has on your workout is as follows: if you are looking to gain physical strength, low rep, high force workouts are ideal; this causes myofibrillar hypertrophy, and is what Olympic powerlifters do to lift the heaviest weights possible. On the other hand, if you are looking for a more toned body, with larger muscles, but not necessarily the strength which might be associated with the body shape, you should do lower weight, high rep workouts which tire your muscles to fatigue – this is what bodybuilders do. This results in a heavy use of anaerobic glycosis, and a subsequent build-up of metabolites and therefore the sarcoplasm. To get a balanced hypertrophic response, balancing both muscular volume, and muscular strength, current research suggests that training regimens that produce significant metabolic stress while maintaining a moderate degree of muscle tension are the most successful. This means medium rep exercises, with large rest periods, whilst ensuring that a wide variety of exercises are completed. Furthermore, some exercises should be completed to exhaustion.

But the most important thing is that you engage your muscles in some way, as, if no muscle growth goes on, the opposite occurs, which is called muscular atrophy. This is when the key mechanisms that regulate the turnover of contractile proteins and organelles in muscle tissue become impaired, which can be due to many reasons, including a sustained lack of physical activity (especially noticeable after a brace has been worn for a long period of time) or some metabolic and neuromuscular diseases. So now, hopefully you understand what happens when you exercise your muscles, and how they grow after exercise – I hope that you get the opportunity to apply this theory into practice.

I actually got this article published in a magazine (the one on the left), which contains many other fascinating articles.