Ok, first thing’s first- I am not a squeamish person. At all. Not in the slightest. So in biology yesterday when we were told we were about to do a locust dissection (to investigate insect gas exchange systems).

I was beaming and jumping for joy (not even exaggerating…). That was until they brought out the locusts.

They were still alive.

After being gassed twice and being left in the fridge overnight.  So, my teacher cut off their heads. 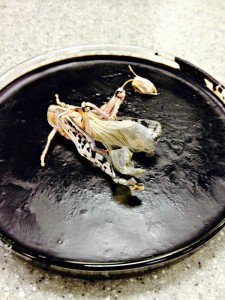 They still moved. And so did their heads.

Seriously. These seemed like miracle locusts. I figured that this was probably a nervous response, or muscle spasms, so I said to myself, “I’ll just wait until they’ve stopped moving before I start”. 20 minutes later, my locust was still moving its legs and its antennae were responding to a stimulus. By this stage I decided I’d better just start the investigation.

I hated making the first cut, because I felt that I was torturing this innocent creature but apparently they don’t feel pain… 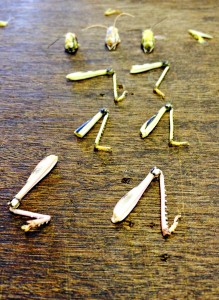 By the time I’d cut off the legs and wings and pinned it down, it looked like it’d stopped moving so I continued on to remove the top of the abdomen and muscle and gut. This was actually really interesting and you could clearly see the spiracles and tracheals. I was actually quite proud of my completed dissection as I think it was quite clean and after removing everything, I still managed to leave two tracheals. That is until I realised that it was still alive. 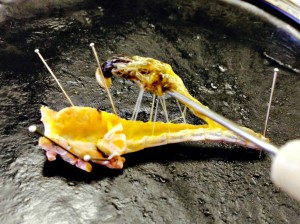 The abdomen (what was left of it) was pulsing to try and get oxygen into the spiracles (the locust’s gas exchange system usually relies completely on diffusion, but due to the lactic acid build up (from anaerobic respiration) the locust pulses its abdomen to try and get fresh oxygen). So it was still alive. Two hours after having its head cut off and having all its internal organs removed. I feel like a horrible person, but it does mean that I will never forget this dissection and will always remember how locust gas exchange systems work.