So, today was my first day of five doing work experience at a large hospital near where I live. First of all, it was a bit of an adventure getting to said hospital; we weren’t sure where the bus was leaving from, so after driving round for a bit, we saw it leaving without us, so we chased it down… (side note: I went on this adventure with my friend Eleanor, who is also a young and aspiring medic (see her blog I Will Study Medicine)). We did finally manage to catch the bus but we weren’t sure if it actually stopped where we wanted it too…anyhoo, we got there eventually and on time :).

Well, anyway…once we got to the hospital, we were given our security badges and we headed off to cardiology. Eleanor and I split off to see different aspects of life in the cardiology department. I spent my morning watching angiograms and angioplasties.

An angiogram is a test (using x-rays) to find narrowed arteries (caused by plaques and atheroma’s) supplying the heart. These narrowing’s cause symptoms such as angina and could lead to myocardial infarction. 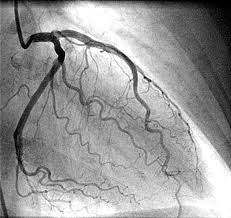 Dye (iodine) is pumped into the artery via a catheter. The iodine makes the blood too dense for the x-rays to pass through, so is darker on the image. The catheter can either be inserted via the femoral artery in the groin, or through an artery in the wrist.

Of the three angiograms I saw being performed, two turned into angioplasties, which are the widening of the artery.

A wire with a balloon (not a birthday balloon 😉 ) was fed through the catheter and was inflated (best way to describe it) to flatten the plaque against the artery wall. A balloon with a stent (a mesh tube) was then inflated and the stent was left behind to keep the artery widened. Another balloon was then inflated to further widen the artery. 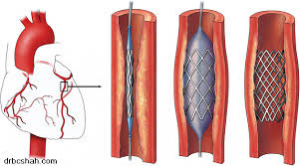 In one case, the surgeon wasn’t sure whether to send the patient for a bypass or to use a stent. The patient was diabetic and both methods had their equal pros and cons. For one, the bypass would’ve had a longer recovery time and is more invasive. On the other hand, the stent would be quite long, as a long section of his artery was narrowed. In the end, the patient chose the stents, which were put in straight away. 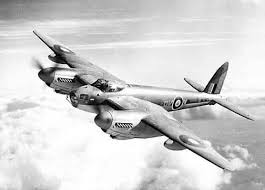 As well as learning about angiograms and angioplasty, I also learnt about planes. Yes, planes. So anyway, the first patient I saw joined the RAF just after world war two, and flew mosquito planes, which had two Rolls Royce Merlin engines and were faster than spitfires. It was really interesting to hear his story. What I’m trying to say is, that apart from learning about the technical procedure, which was fascinating, another important and interesting aspect of work in the hospital and as a doctor is finding out about the people you are treating; you never know who it is that you are meeting, and what they’ve been through. Part of the job is to find out about them.

Okay, so I slightly side tracked there…anyway…after lunch, I went on to see…

I sat in for four consultations. Three cases were similar cases of chest and left arm pain, with jaw and throat tightening which increased with exercise or exertion. These cases were all sent for chest x-rays and angiograms. Among other case similarities, I noticed that these patients had smoked all their lives (and only given up a few years ago).

The last case was more one of the “worried well”. A family member had suddenly without warning; he was concerned he was displaying symptoms of angina (which he was worried could lead to a heart attack). This patient had been feeling slight chest discomfort every so often for a few months, but this had no links to exercise or exertion. You would usually expect the chest pain to be triggered by exercise because there is a lack of blood supply to the heart, due to narrowed vessels. The consultant concluded that the patient was not suffering from angina but sent him for an ECG check for any rhythmical abnormalities and to put the patients mind at rest. She did not think an angiogram was necessary. It shows that it is as well as treating the sick, it is important to put the worrier’s mind at rest; it is like a treatment in itself. Interestingly, linking with what I previously mentioned about smoking, this patient did smoke, but only until the age of about 25 (all patients were in their 50’s – mid 60’s ). 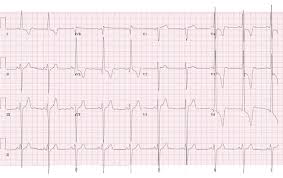 Before the second patient went in for her consultation, she had an ECG (electrocardiogram), which I was allowed to sit in on and watch. I got to talk to her before the ECG, and it was great to just talk to her. She was such a character and was lovely to talk to. She didn’t just have heart problems, she also had bad lungs, arthritis and hip problems. The ECG shows the electrical activity of the heart. Small metal electrodes are stuck on the chest, arms and legs to pick up the electrical impulses and record it to the computer. It is painless and only takes a few minutes to do. ECGs can help find the cause of heart palpitations and chest pain. 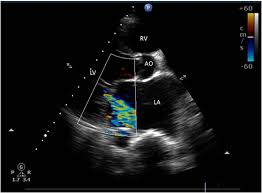 Finally, after the consultations, I went to see an ECHO (echocardiogram). This uses ultrasound to give a picture of the inside of the heart (heart muscles, chambers and valves). It also showed the flow of blood in the heart (in colour), to show abnormal flow next to a damaged valve for example (doppler ECHO). Valves may be damaged because they’ve hardened, due to calcification (which is usual in older patients). The patient I saw came in with shortness of breath. The valves showed some calcification, but only as part of aging and it wasn’t affecting the blood flow or decreasing the effectiveness of the valves.

So…that was the end of my day in cardiology. I really enjoyed seeing how the different divisions work together and being able to watch the actual procedures. Well, hopefully I will write again tomorrow; I will be spending time in the neonatal unit and paediatrics, as well as general outpatient.