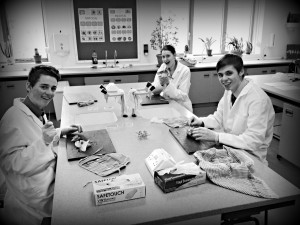 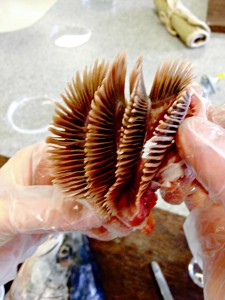 Okay, first of all I’m going to briefly tell you, good reader, how a fish gas exchange system works. So, water enters the buccal cavity (fish’s mouth) and passes out through the gills.

Each gill is made of lots of thin plates called lamellae (gill filaments) which have a large surface area for a faster rate of gas exchange. Secondary lamella come out of the (primary) lamella to further increase surface area. The lamellae have lots of capillaries and a thin surface layer of cells (good blood supply and thin diffusion pathway increase rate of diffusion). There is a counter-current system (which means blood flows one way, and the water flows over in the opposite direction). This maintains a steep concentration gradient between the water and the blood (so as much oxygen as possible diffuses from the water into the blood).

The first was a fish head dissection. We were given a Salmon head each (which were kind of creepy, with their staring, dead eyes…ugh…I don’t really like fish…) and we were told to remove the operculum (a bony flap which covers the gills) and gills. This was quite cool and I think I did quite a good job of it (if I do say so myself 😉 ). Once remove, I cut off one gill and suspended it in water. A lot of sediment washed out (I think either sediment from the oxygen filtered water or from being 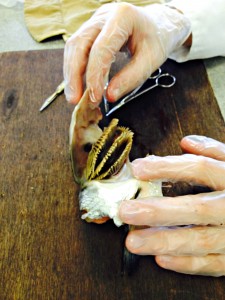 frozen…or some secondary lamellae). I then took a closer look at the lamellae with a magnifying glass, but I couldn’t see the secondary lamellae (which was a shame, but ho hum). I had a look for the blood vessels which pass over the operculum (which I found 🙂 )

I’d always wondered how fish managed to get enough oxygen from the water, and how they breathed…so it was really interesting to get to actually see it. (We also went on a trip to the hallway outside the classroom and watched the fish for a bit, which was quite relaxing actually, and we got to see their operculum opening and closing (if we looked closely).

So, now that we’d done what we were meant to, we were allowed to look at other structures in the fish head, so I removed the eye (yes, I know it sounds horrible…and it was…), and I managed to 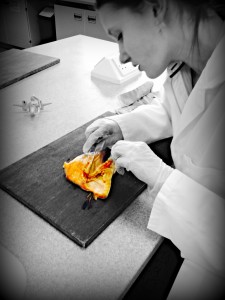 remove the lens, which I was quite happy with (especially as last time Eleanor and I did an eye dissection we managed to wash the lens down the sink…oops…).

Well…yeah…that was about it for fish head dissection…

Giving a leaf a manicure

Ok, you’ve probably guessed from the topic of gas exchange that this isn’t just some fun girly boredom (although I did try to paint Henry’s nails (he wouldn’t let me (surprisingly))) (wow, that’s a lot of brackets…). So yes, we were investigating the number of stomata/stomata in general, on leaves. 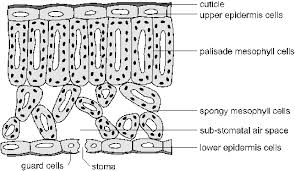 So, as you know, plants need CO2 for photosynthesis (which produces O2 as a waste product). The surface of the mesophyll cells is the main gas exchange surface in the leaf. They have a large surface area, which is bonus for their function as an exchange surface J. The mesophyll cells are inside the leaf, so how do the mesophyll cells ever have any gases to exchange???!!! Well, the gasses enter through the Stomata of course! Stomata are pores in the lower epidermis. A pair of guard cells on either side of the stoma control the size of it/whether it’s open or closed. Hmm…closed? But surely they would always need to be open!? Well, they close to minimise water loss.

To start off this investigation, I painted the underside of the leaf with clear nail varnish. Next, (once the polish was dry), I peeled some off and put it on a slide. After preparing the slide, I viewed it under the microscope, under different magnifications. I was amazed how many stomata there were. Literally millions! The leaves had been left in the certain conditions, so that the stomata were open. The eyepieces of our microscopes contained a scale, so we measured the size of one stoma (height and width). I can’t remember exactly the size, but I think I found one which was 13 x 11 micrometres (I think…as I say, I can’t quite remember…).

Well, then, sorry if this was a bit boring for you my dear reader, but to be honest, they were quite fun to carry out J.

Goodbye until next time.