So, today I visited two departments within the hospital- C.I.D (Clinical Investigations Department) and the day hospital and discharge lounge.

In C.I.D. I was allowed to observe varied cardiac tests, such as an ECHO and a pacemaker check-up. I won’t go into much detail about the ECHO because I spent a morning in cardiology at my last hospital placement, so if you want to find out more about it then you can go ahead and follow the following link: Cardiology…but basically, an ECHO (echocardiogram) is an ultrasound of the heart showing the chambers, valves and blood flow. It was being used today because the patient came in with chest pain, had already had an ECG and had been referred for an echo. The echo showed that everything was normal with his heart…so we don’t actually know what is causing the pains… 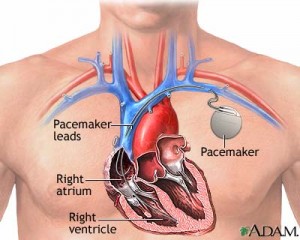 Patients with pacemakers have a pacemaker check-ups once a year, just to make sure everything’s going tickady-boo J and that there are no problems with the pacemaker. Pacemakers help control abnormal heart rhythms by giving out low energy electrical impulses. They are a small device implanted in the chest or abdomen with one, two and sometimes three leads going through the Vena Cava to the right Atrium and Ventricle. My friend Eleanor was extremely lucky during our last work experience placement in the fact that she got to see a pacemaker being implanted, so if you would like to find out more about that, here is a link to her post: I Will Study Medicine

The patient I saw was having an early check-up because he’d felt light headed and dizzy 5 times in one day, so they moved the check-up forward to see if the pacemaker was the problem. An ECG was taken and the results showed no abnormalities with the pacemaker.

I also spent some time in a “Gentle Gym” session, where heart failure patients come once a week to help increase their cardio fitness and build up their heart muscle, therefore lowering their heart rate and becoming generally fitter J. The session started off with a warm up to music, and included exercises such as marching on the spot and lots of dance-like moves. They then proceeded to use the gym equipment in a rotation. Once they feel that the gentle gym is too easy, the patient can move up to a more difficult level.

Well…I then spent my afternoon in the Day Hospital and discharge lounge:
In the day hospital, I observed blood transfusions and Immunoglobulin (monoclonal antibodies) being given intravenously and I also got a chance to talk to the patients having the transfusions. What really surprised me was the cost of some of these treatments, for example, the immunoglobulin cost about £700 per bottle, and the patient had to have four bottles transfused. Of course, it is worth the price as it completely alters the patient’s life and immensely improves his quality of life, letting him live normally. I also observed blood being taken for samples and blood being removed (because the patient had Haemochromatosis (too much iron in the blood)). Haemochromatosis is caused by HFE (a faulty gene), causing too much iron to be absorbed from the food. This is basically the opposite of anaemia… After the removal of the blood, it was just thrown away, which both the nurse and I thought was a waste…we both wondered whether it could be used for other transfusions…but then again, it has too much iron in it…so it could cause problems for the receiver.

Anyway, thank you very much for reading this J. I’ll be back again tomorrow, so I’ll keep you posted on my happenings! Bye bye!