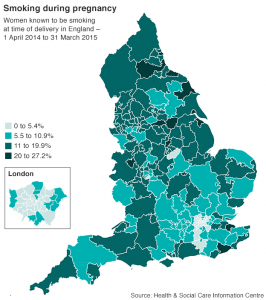 Ok, so I’ve been meaning to post for ages now! …There’s been so much to blog about, so I will catch you up on it, but I’m going to start with a headline from the BBC News website which caught my eye this morning: “Regional divide in smoking in pregnancy”.

According to NHS data, 27.2% of pregnant women in Blackpool smoke throughout pregnancy compared with 2.1% in Westminster. The total rate has fallen to under 11% in England, but the “Smoking in Pregnancy Challenge Group” report urges a national target of below 6% by 2020. Prof. Russel Viner, at the Royal College of Paediatrics and Child Health, also says that teenage mothers-to-be “are almost six times as likely to smoke throughout pregnancy as women who are over 35”. Obviously, smoking is bad for the mother, but it is also bad for the baby and causes many problems during pregnancy.

Cigarette smoke contains more than 4,000 chemicals, including cyanide, lead, and at least 60 carcinogens. These chemicals then pass into your bloodstream and some are able to pass through the placenta and are affectively “fed” to the baby (as the blood is it’s only source of nutrients). The two most harmful of the chemicals in cigarettes are nicotine and carbon monoxide. According to James Christmas (oo, cool name! 😉 ) (director of Maternal Foetal Medicine for Commonwealth Perinatal Associates at Henrico Doctors’ Hospital in Richmond, Virginia) (wow…long title…), Nicotine and CO “account for almost every smoking-related complication in pregnancy”. These include stillbirth, miscarriage, premature birth and low birth weight. This is because CO and nicotine reduce the blood supply to the baby (nicotine narrows the blood vessels and carbon monoxide binds to the haemoglobin reducing their ability to bind to oxygen, therefore reducing the oxygen supply to the baby). Smoking also affects the baby in later life; children of mothers who smoke whilst they are pregnant are more likely to have learning disorders, behavioral problems, lower IQs and developmental problems. Continuing or returning to smoking after birth also increases the risk of cot death and increases chance of asthma and respiratory infections. Second-hand smoke also increases the likelihood of complications during pregnancy.

According to BBC News, in the UK smoking during pregnancy causes:

…each year! And also, every year, more than 70,000 pregnancies are affected by smoking.

So, basically…don’t smoke during pregnancy…despite the myth that having a small baby will make labour easier, it isn’t true- it doesn’t mean an easier birth and the baby may have to stay in hospital after they are born.

Ok…I’ll shall post soon to catch up on those sneaky news stories which keep creeping up on me! 😉 see ya!