Like Spina Bifida, Encephalocele (also known as cranium bifidum) is the herniation of the brain tissue and meninges but is outside the skull, instead of the spine. The result is bulge of brain tissue, meninges or parts of bone, from the skull and is usually located down the midline occipital area of the skull (middle back), but it could really happen at any part of the head. It is a rare type of NTD and according to CDC, 1 in 10000 babies are born with it in the USA.  This occurs 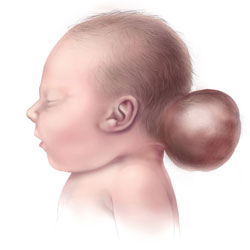 when the neural tube doesn’t close properly, leading to a herniation process which appears as a sac protruding through a defect in the cranial vault. This means the embryo’s cells which form the skull don’t come together to close over the brain. Encephaloceles toward the back of the skull are associated with neurological problems, whereas those towards the front of the skull don’t usually contain brain tissue, so therefore generally have less of an adverse effect.

We don’t know the cause of Encepaloceles, but it is believed that both genetic and environmental factors contribute towards it. For example it’s more common in those who a family history of NTD’s (e.g. Spina Bifida and Anencephaly).

As with other NTD’s, screening methods include AFP serum screening and ultrasound, although because encephalocele is skin covered, AFP is less effective.

Encephalocele can be sub-classified as cranial meningocele, encephalocystomeningocele and encephalomeningocele.