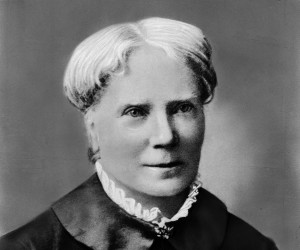 Dr. Elizabeth Blackwell (1821 – 1910) was the first woman to receive a medical degree from an American medical school, as well as being the first woman on the British medical register.

Elizabeth Blackwell was born on February 3, 1821 in Bristol, England and moved to the United States in 1832 where she pursued a teaching career. However, even after receiving widespread opposition, she went to medical school and graduated first in her class. Her inspiration behind entering the field of medicine was from one of her close friends who was dying who told her that she wouldn’t have had to go through such terrible suffering if she were treated by a female physician.

Apart from being the first recorded female doctor, Elizabeth received many accomplishments during her lifetime. These include the fact that she set up a medical school for women in the 1860s who were rejected from places elsewhere but were determined to become physicians and even started her own private practice when she returned to England. In 1852, she published a book called ‘The Laws of Life with Special Reference to the Physical Education of Girls” which focused on the physical and mental development of girls in preparation for motherhood.

Since 1949, the Elizabeth Blackwell Medal is given to a woman physician from the American Medical Women’s Association. Hobart and William Smith Colleges also give the Elizabeth Blackwell Award to women for outstanding service to humankind. In the US today, women make up around 47% of medical students – an achievement that may not have been possible had it not have been for Dr. Blackwell’s determination to defeat gender inequality in medicine.

Finally, I would like to end on a quote by Dr Elizabeth Blackwell: she said that

“If society will not admit of woman’s free development, then society must be remodeled”

which just shows how much of an inspiration she really is. Maybe one day, one of you reading this blog will follow in her footsteps and accomplish exceptional targets that at one stage, seemed impossible.

Thank you for taking the time to read my blog, if you have any questions or comments feel free to leave them down below!