Multitasking allows people to do more than one task at the same time, and is seen as a very efficient method of working. The art of multitasking is, in fact, very hard to master and most people fail to achieve it properly. The aim of multitasking is to conduct two jobs simultaneously, not just switch between each of the tasks and refocus concentration each time.

When the brain switches focus to deal with multiple tasks, this is known as interference and none of the tasks are learnt efficiently. This is because the  tasks “compete” to become the more prominent memory in the brain, which can ultimately reduce productivity by about 40 percent.

Due to this hugely common problem, a study was led by tudent Jasmine Herszage and Dr. Nitzan Censor, of Tel Aviv University’s School of Psychological Sciences and Sagol School of Neuroscience in Israel in order to find a way to learn more efficiently and “reactivate the learned memory”. Dr Nitzan Censor said:

“Our research demonstrates that the brief reactivation of a single learned memory, in appropriate conditions, enables the long-term prevention of, or immunity to, future interference in the performance of another task performed in close conjunction.”

“The second task is a model of a competing memory, as the same sequence is performed using the novel, untrained hand. In other words, when a learned memory is reactivated by a brief cue or reminder, a unique time-window opens up. This presents an opportunity to interact with the memory and update it – degrade, stabilize, or strengthen its underlying brain neural representations. We utilized this knowledge to discover a mechanism that enabled long-term stabilization, and prevention of task interference in humans.”

It is hoped that this finding can be used clinically to help people undergoing  rehabilitation following brain injuries that impact memory in the future. 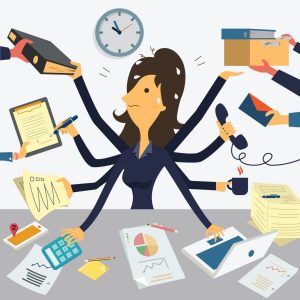 Thank you for reading my blog, I hope you found it interesting. If you enjoyed it, please leave a rating and comment how good you are at multitasking!