The Ancient Romans heavily contributed to the progress in many areas of the Medical Field. Many of their Medical theories were adopted from the Greeks, which still remained popular until the 17th century.

Most Roman surgeons got their surgical experience by treating soldiers on the battlefield. They used instruments like arrow extractors, catheters, scalpels, and forceps. They knew the basics of sterilisation as they would put their instruments in boiling water before use. They did not, however, have effective anaesthetics. But this wasn’t a problem as they didn’t operate deep in to the body.

Roman physicians liked to carry out thorough physical examinations of the individual, however the problem was that doctors tended to develop their own theories and treatments – progress in this was a slow process. Like the Egyptians, a wide range of herbal remedies were used. For example, fennel (treatment for nervous disorders), unwashed wool (treatment for sores), egg yolk (treatment of dysentery – inflammatory disease of the intestine), sage (a ‘religious’ treatment), garlic (treatment for the heart), willow (used as an antiseptic), and fenugreek (treatment for lung diseases, especially pneumonia).

The Romans took a lot of care in maintaining their high standards of public health by the use of public baths, hospitals, and a good water supply. The Romans are known for their Roman Baths as they were constantly vigorously inspected to enforce proper hygiene standards. 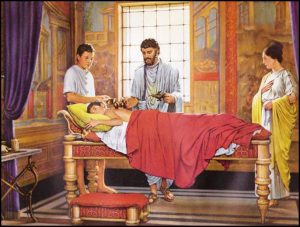 Thank you for reading this weeks blog, If you enjoyed the read, feel free to leave a comment down below!