Leo Tolstoy was a Russian writer in the 1800s. At one point in his life Tolstoy began to experience an increase in depression which was due to his inability in finding a meaning to life.

He turned to philosophe 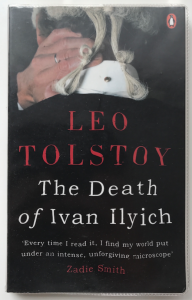 rs and other writers at the time to find answers however found that they were valueless and inadequate. As a result, he speculated what the Russian population at the time were doing about it instead. He observed that the most content class were the peasants as they had conceptualized life through the belief of a creator i.e. God and a religion, and consequently had gained a sense of comfort and security from it. Tolstoy adopted the same approach and found faith helped overcome his depression. This conversion led him to write the following book that I will be reviewing.

The novel was written to depict Tolstoy’s religious/philosophical perspective of life and death, therefore at first glance the literature seems irrelevant to a medical student however this is not the case. Within this book, Tolstoy has fictionalized his thoughts and his conversion to faith through the character Ivan Ilyich and his death due to a severe health condition. Consequently, I have been able to pick up on a few medical related points/lessons about ill health and the effects it can have on a patient from an abstract perspective.

When reflecting back on the book, I noted three aspects that Ivan, the patient, had to battle with throughout his journey. They were the following: the doctor’s approach and care, the family’s response and his own wellbeing.

After having experienced some pain in his side, worried, Ivan decided to see a doctor. In his first consultation he described the doctor as a cold, intimidating and scrutinizing individual to the point that Ivan felt he could not comfortably ask any questions regarding his diagnosis. The doctor’s nature made Ivan apprehensive about the reaction he may get if he were to pose his concerns. Unsurprisingly, this left a bad impression on Ivan and therefore on his next encounter with a doctor, who was much more warm and friendly, Ivan felt it was a façade and would not take on board the doctor’s words. I felt that this scenario very clearly highlighted the significance of empathy and the need for a patient to always feel comfortable communicating with their doctor. From the first clinician who diagnoses them right up until the end, doctors should take it upon themselves to ensure and provide an environment that enables and accommodate patients to always feel heard and understood. As a result, instead of fluctuations in their comfort levels throughout the progression of their treatment, by ensuring a persistent trend of ease, patients will be more willing to talk about what is going through their mind at every stage. These may be worries regarding the diagnosis, treatment or even personal/social issues, nevertheless by coming forward it would benefit them both physically and mentally.

One quote that really summed up Ivan’s thoughts with regards to his family was the following: ‘…his life has been poisoned and is poisoning other people’s lives, and the poison is not wearing off, it is working its way deeper and deeper into his very being’. It shows that he felt like he was becoming a burden they had to shoulder amongst their busy lives. As a result, with no one to not necessarily pity him but even understand him, he did not have the physical aid and the mental support to fight against the cruelties of his condition.

At one point in the book it describes how he could not eat or take his medication as instructed by the doctors and therefore in response to this his family would find his actions insane and irrational. However, this was a clear miscommunication between the family members. The fact Ivan felt he could not approach the family meant he was put in a position where he could not explain himself, and a result, he suffered the consequences as his pain worsened and his worries became deeper – as Tolstoy put it ‘And he has to live like this on edge of destruction, alone, with nobody at all to understand and pity him’

This scenario could easily be the case amongst patients who have chronic conditions/diseases such as CHD or cancer. The importance of ensuring their most immediate network is able to act as a support system is crucial to a stable wellbeing. Even if this just involves having someone to talk to every now and again, through establishing this simple communication, it would mean the patient’s psychology does not play a role in the deterioration of their condition, which we usually hear is the case.

Throughout the novel you could sense that Ivan was in a constant whirlwind of emotions, from confusion and worry to denial, depression and even fearing the inevitable unknown – all of which lay upon the physical pain he was also experiencing. In response to this, his family and doctors would constantly offer him medication to try and treat these ‘symptoms’, meanwhile forgetting the individual behind it all.

This made Ivan feel lonely and hence he sought comfort in solitude and found it easier to deal with the condition himself rather than bothering anyone else, as Tolstoy writes ‘He would go into his study, lie down and find himself alone again with It [the pain]. Face to face with It. Nothing to be done about It. Only stare at It and go cold.’ However, as I have reiterated before, this is unhealthy for a patient, as it is a state of wellbeing that will not guarantee an improvement in health but only a further downfall which could possibly put them down a path of no recovery at all – as this quote wisely puts it – ‘The doctor said that the physical pain must be dreadful, which was true. But more dreadful than the physical pain was the suffering in spirit, his greatest agony.’ – a pain that cannot be treated but definitely understood and addressed.

Considering this was a novel which has been classified under the genre of philosophy, surprisingly I have been able to grasp quite a deep understanding of what it is like to be a patient who seems to be battling more than one front. It has helped to reiterate how much of an effect the environment can have on a patient. I can now understand that through lessening the pressures of this environment, only then would it be possible for the patient to get better. Whether this is through ensuring healthcare professionals care correctly or the family are a part of the patient’s journey, or even both, these factors play a role in helping alleviate the patient’s distress, something I would assume is a highly necessary effort for a vulnerable patient who is going through a difficult time.