A memoir put together by his grandson and similar to ‘The Way of a Surgeon’, this book by Dr White-Cooper also recounts on medicine in the 20th century, thus allowing me to, once again, draw comparisons and see the stark contrast between healthcare before/during the war compared to healthcare in the post-war period.

‘Call The Doctor’ was a very refreshing read in the sense that it offered a doctor’s perspective at a time when the NHS did not exist and at the time of the war. Dr White-Cooper recounts his experiences and presents anecdotes of most patients he has met through each chapter. From an experienced surgeon to a GP in a small town, his years of work have enabled him to amalgamate a range of experiences and stories. 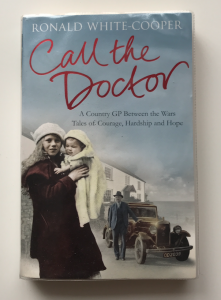 The title ‘call the doctor’ refers to how patients would previously get hold of their doctors, be it via letters or through using the local post office telephone. As one of the few doctors in town, Dr White-Cooper had a variety of roles, from treating patients in his clinic which was on the second floor of his home, prescribing treatment and then proceeding to dispense them himself (as there were no designated pharmacists at the time) and even attending patients in their own homes. Clearly, you can see how much the doctor’s role today has altered as it is mostly clinic based unless you work in much more remote areas.

The healthcare culture back then is truly a shock to us now, but I find it so fascinating that this is the system people would go by and were content with. Today, there are still places around the world that still follow a similar culture, naturally this is due to being a third world country and therefore not having the means to develop further which unfortunately means these individuals must travel endless miles unsure and only hopeful to get some form of medical treatment. But hopefully this too shall one day change.

When studying A-Level History, one of the factors I learnt that really pushed and revolutionized medical provision were in fact the Great Wars. At such a dire time where individuals were really vulnerable and also suffering multiple conditions from infections to mental instability, there was a gap in the market for much needed interventions to address the needs of these individuals. Hence the adoption of a National Health Service and the reason healthcare/science has excelled ever since.

At the time I am sure Dr White-Cooper never considered how insightful his accounts of his everyday practice and experiences would be, however they have certainly proven to be a positive contribution to the history of medicine.