As I was roaming the White Cliffs of Dover, I came along a marquee which had a wide array of second-hand books that the locals were giving away for a small donation. When browsing through the wide selection of books I coincidentally came across the following. As the only medical related book I could take away from the White Cliffs and due to such an intriguing cover, I decided I would make this my souvenir from the trip. 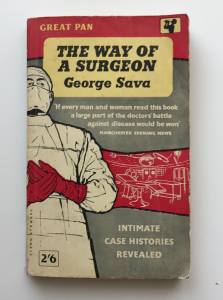 Within the first chapter, Dr Sava discusses neurosurgical procedures all of which seemed pretty similar to the types of surgeries we have today which deal with brain haemorrhage and oedema. However, it was interesting to read that at the time there was still no scientific explanation behind convulsions, a stroppy face due to stroke and depression, hence treatment for these conditions would be limited. In fact, it was shocking to read that the doctors at the time would refer to mental health as as ‘the most pathetic and terrible of all the ills to which the flesh is heir’ and depending on the severity of the depression they would invasively operate on the individual through a procedure called a leucotomy, i.e. the removal of the front part of the brain. Although this was deemed successful in ‘curing’ the depression, this then had major side effects of causing the individual to present childish traits. But unsurprisingly, at the time, this behaviour was considered to be much less of a problem compared to someone who always talks of suicide.

Understandably, we have to remind ourselves that this book was written at a time where medicine was just beginning to take off and the search to find a scientific explanation backed through statistical evidence was just developing. It was still to early for them to know how best to treat these patients and in fact what exactly they were treating. But as a 2017 reader, where it is common knowledge that those with mental health issues can be dealt with through counselling and drug treatment, it definitely makes you appreciate that such drastic actions are no longer taken today.

In the book, Dr Sava is reviewing and comparing the progress of surgery from the 1920s to the 1940s, i.e. from the time he is a medical student to a specialist, and hence proceeds to discuss how much the medical field has advanced. For a reader at the time the practices and interventions Dr Sava discusses would seem like a medical revolution but when comparing it to medicine today, we would perceive them as traditional and flawed practices. Over the last century, the research we have conducted and the data we have accumulated have enabled a wide range of new interventions and treatments to be discovered, hence our pool of knowledge has expanded. However, it is so interesting to see how stark the differences between practice then and now are. A random book which I lay my hands upon has become a real eye opener and has made me realize that although we have so much faith in our current practice and believe it to be the best as Dr Sava so confidently believes the same in his book, medicine is still growing and changing, to the point that in a coupe of decades’ time we will look back to the practice we conducted in 2017 and possibly cringe at how invasive some surgeries were and the mortality rates they carried with it. What would be even more amusing is if the future generations read about our common surgical practice and I would like to think, they would wonder why humans performed operations when there are perfectly capable robots. Ultimately, the point I am trying to get across and the reality of the situation is that we should never proceed to settle with the idea that what we have now is what will stay as nothing is written in stone, and as it has been said so many times before, as long as this world’s technology develops then it is not long before our profession taps into these advances, taking advantage of their presence and hence they begin to manifest themselves into medical practice and treatment. In fact, even Dr Sava at the time acknowledges how much further medicine has to go through the following statements: ‘the future may see the surgeon perhaps even grafting new valves into the heart’ or ‘the use of artificial radioactive elements’. As Sava realises, ‘Medical science marches fast, and the near-incurable of yesterday is so often the curable of today’

One thing that did not fail to surprise me when reading this book is the behaviour and tone at which Dr Sava would consult his patients with. In chapter four, a patient came in with a diagnosis of TB and therefore believed his chances of survival had dropped rapidly to the point where he isolated himself and broke ties with his fiancée. The doctor, very uncharacteristic of a modern day physician, told him he was being a ‘spoiled child’ and his decisions were too erratic for a condition that could be treated. Although I can understand that Sava had faith in the treatment options available and its success rates, it is still quite interesting to read about the way he handled the situation. Today, we are taught to always respect a patient’s decision and if we can, render the situation right, in a manner of kindness and co-operation. Yet the contrast shows how much not only our medical techniques have advanced but also our conduct as a profession. In one of my clinical and professional practice lectures this year, I learnt that the scale of control between the doctor and patient has begun to level, we have moved away from the paternalist approach that Dr Sava clearly took, and have landed ourselves in a position of mutuality i.e. both the doctor and patient work together to reach a final decision. (Ezekiel J. Emanuel and Linda L. Emanuel.  “Four Models of the Physician-Patient Relationship.” JAMA 267:2221-6, 1992). Naturally, this is more empowering for a patient and also helpful for a doctor to understand what clearly matters mostly to a patient. However, once again, we have to remind ourselves that Dr Sava was practicing at a time doctors were seen as the elitists in society and therefore they held quite a lot of power and were respected tremendously, resulting in Dr Sava’s approach to the situation at hand.

Surgery is truly an exceptional specialty. As a practice that has been occurring since the beginning of time, from meagre amputations to today’s complex transplantations, it is a branch of medicine that is truly fascinating. It comprises of a range of knowledge, from understanding every detail of the human anatomy, the complex physiology and the need to be able to make fine cuts and sutures, it is an art in itself. However, as Dr Sava states after removing the uterus of a young female patient in order to reduce her pain, ‘Does the surgeons knife still cure one tragedy by creating the seeds of another?’. The operation resulted in her not being able to have children which was a major concern for the lady and her partner. He realises the limitations of surgery. Although it can be a major solution to a range of diagnosis’, it can be the cause of future complications. Indeed, this is something to expect when knife is put to skin and this delicate vessel is opened, nonetheless it means there is always more room for improvement.

Overall, it was a truly fascinating read. The comparisons I have been able to draw through being able to step back in time through Dr Sava’s words, has been remarkable. It is refreshing to read and acknowledge where we were a century ago relative to now. It makes you realise that we have come far and we have still yet to go even further.